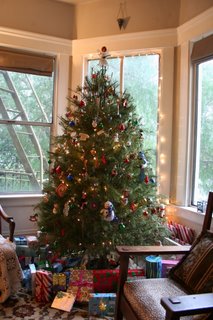 And like that, it's all over. But it was fabulous while it lasted!

Christmas Eve was a blast, with family, good food, and more presents than could fit under the tree. One of the gifts I gave my aunt Bernadette caused her to burst into tears, in what I hope was a good way, but that was really the only bit of emotional outburst so I think we can deem the evening a success.

I decided to join my aunt Flora at midnight mass on Christmas Eve, and it's the first time I've been to midnight mass in over five years. We didn't go to St. Patrick's, the church my grandmother went to for a number of years; instead we went to mass at Old St. Mary's on California. It was quite lovely, with an hour of Christmas carols performed by a choir and a small orchestra beforehand (their rendition of that "Comfort and Joy" song was particularly dramatic. Also, one of the soloists sounded just like Sebastian Cabot Glen Yarbrough in "The Hobbit.") And the mass, while it had its moments of complete cheesiness (a bit of theater between the priest and the "Ghost of Caesar") was, for the most part, quite nice and not too...uh...preachy. But it was also kind of weird. After over two decades of Christmas masses in a church with a primarily Filipino congregation, and Filipino priests, it was odd seeing the mass being delivered by a white dude. Nonetheless, I'm really glad I went, and am actually looking forward to going again next year. (I think it's easier to get excited about going to church when you don't have to go every week. But don't tell God I said that!) 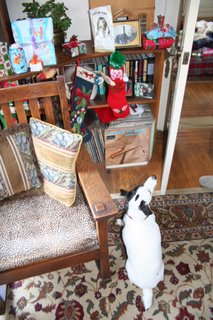 Going to bed after 2am meant I wasn't able to do do my usual wake at five because I'm emotionally stunted and can't wait to open all my presents thing. Instead, my parents' dog decided to wake me up at 7:30 because he's emotionally stunted and couldn't wait to open his presents. He's gone through enough of these to actually know it's Christmas morning, and after waking me he went and stood in front of his stocking and whined until we were all up and finally gave him a present to open. Sheesh. Children!

I got a lot of good loot, including a DVD recorder so I can finally transfer all those old bits of video I've accumulated on VHS over the years, and then post them up on YouTube to the delight of dozens!

The weirdest bit of Christmas kismet had to be when I looked at the DVD of "Blood Tea and Red String," one of my presents, and saw a quote from ME ON THE BACK OF THE DVD! Check it out! My first blurb!

Sigh. But now it's Tuesday, and I have to actually try and work. Sheesh! I better sneak another piece of coal on the fire and hope my boss doesn't find out!
Posted by Rain at 10:57 PM

cool, congrats on your first [that you KNOW of] blurb! youre on your way to becoming the next pauline kael...sweet.

I predict she's going to turn into the Joel Siegel of SF bloggers, putting in a good review for EVERYTHING just so she can get on the box.

"'Beerfest' is a triumph of the human spirit!" -- Rain, SFist.com