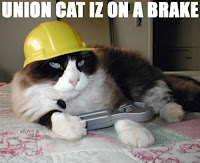 I guess I should say something about the writers strike, huh?

But really, I am all for the writers and what they want. I'm sure it's a lot more complicated than just "Studios = greedy = bad," and "Writers also = greedy, but not quite as bad." But I do think it's pretty obvious that if writers get residuals from reruns, they should also get residuals from any other kind of re-airing of their work, be it online or on DVD....

But more importantly, I'm actually kind of grateful for the break it's giving me in my daily viewing obligations in the late night TV realm. "The Daily Show," "The Colbert Report" and Letterman are currently in reruns. Letterman might come back on the air and try to wing it without a writing staff, which I think is a good thing because the bad thing about all this is that (for the most part) people who work on shows who AREN'T writers aren't getting paid while this strike is going on...

It's also interesting to see that many shows that would have probably been cancelled a long time ago because of bad ratings are remaining on the air because the networks can't afford to pull shows that are already written and filmed when they don't have anything that can go into production to replace them with. But on the other hand, it could also mean that new shows will be cancelled once their episodes run out because why reinvest in shows that could lose their audience after a long hiatus? Might as well start fresh...

Which means only one thing: Get ready for more reality and game shows. And I say: Bring it on. I have a lot of movies in my Netflix queue I'd like to watch.
Posted by Rain at 10:45 AM