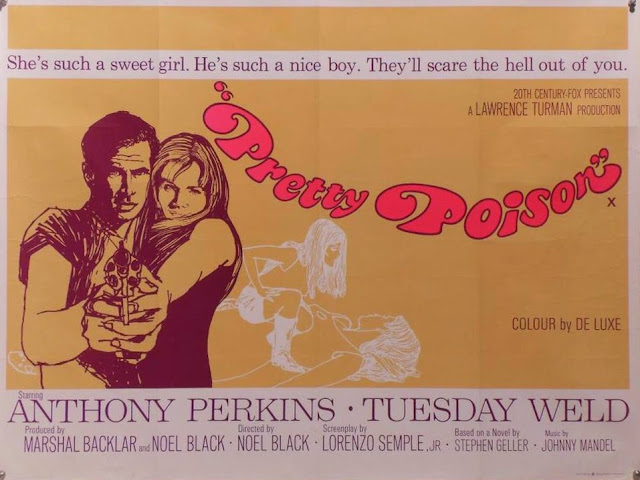 Tonight at 7:15pm, TCM is airing a movie that I used to bribe a teacher to let me into a class that had a waiting list when I was studying film at SFSU. This was back in the days before DVDs and streaming everything, when old films were a lot harder to come by on VHS. During the first class--and for the life of me, I can't remember the topic of the class--he brought the film up as an example of something, and then mentioned how sad he was that hadn't been able to find a copy of it anywhere.

The minute he mentioned that, I knew I had my in. Once class was over, I went up to him and flat out said, "Let me into this class, and I'll give you a copy of Pretty Poison."

It's an appropriate movie to for a female college student to bribe someone with, since it's about a manipulative teenage girl who just might be a psychopath.

End of story: I'm pretty sure I got an A in that class.

As for the movie itself, it stars Anthony Perkins and Tuesday Weld in what might be her best performance, in a film that is kind of a gender swapped version of Badlands, as two screwed-up teenagers fall for each other, and one of them turns out to have penchant for murder. The trailer makes it sound like some kind of screwball comedy, and while it does have its funny moments, it's a lot darker than it looks.

OMG! That soundtrack is hilarious!

Never watched, and now I will have to wait, because I did not set my DVR for this. Ah well, something to look forward to in the future. Thanks for the heads up!

Edward Reed said...
This comment has been removed by a blog administrator.
8:28 AM