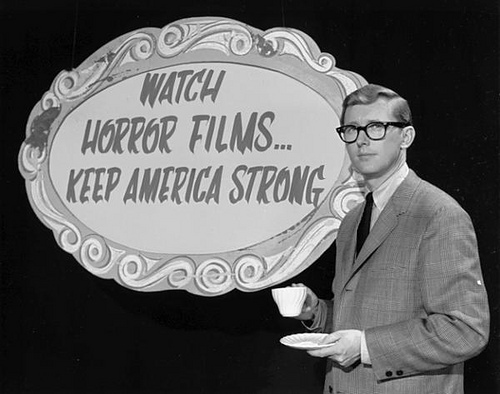 Hey, did you know Creature Features is back? Kind of? Of course, "Creature Features" was a generic title for your local late night scary movie TV programming, and if you grew up in the Bay Area, it meant it was either hosted by Bob Wilkins or John Stanley, with Bob Wilkins being the obviously superior host. And it also had the superior theme song!


Unlike a lot of horror hosts, Bob Wilkins didn't have a gimmick, unless being soft-spoken while smoking a cigar can be considered gimmicky.

For better or worse, this new incarnation features a host with a definite gimmick: he's an aging British goth rocker named Vincent Van Dahl, though Jeff Bodean, the man behind the wig, is actually from Sonoma county.

I've only seen two episodes so far, and it's a little...awkward. There's not much to Bodean's shtick aside from a terrible accent, and the interviews are very stilted. Still, I appreciate the fact that a local guy decided to revive the show. And it looks like one upcoming episode has John Stanley filling in as host, so that's a bonus! Check it out tonight at 11PM on  KOFY-TV20, or online.

I'm a huge fan of the new Creature Features. I also loved the Bob Wilkins original. I'm glad they brought it back to the Bay Area plus they keep Wilkins alive through some of the commercials because Van Dahl was also a fan back in the day. I hope it stays around for a long time.