Everyone Knows It's Wendy 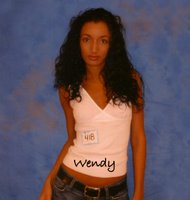 Yesterday I got an email from someone who works PR for UPN. She had read my post about this week's "America's Next Top Model," and invited me to join in on a blogger conference call with Wendy Wiltz, this week's boot-ee. I don't think there was anything extraordinary about the post that got me the invite. I'm sure it was just the luck of a Technorati search, but it was still kind of cool.

Unfortunately, since I was on a cell phone, and en route in a car at the time of the call, I didn't get the clearest reception. If only I could have live blogged it via a spotty WiFi connection at the same time!

All of the bloggers asking questions were disappointed and surprised that she got eliminated (although, who would really be willing to say, "I thought you sucked and deserved to get cut!"). She talked about life during the show, and post hurricane. While the show was in production, she had finally gotten in touch with her family, and they were safe, but she admitted she was thinking about them the whole time; it's no wonder the judges kept saying she had a "sad" look about her. Uh...yeah! After getting booted, she moved to New Jersey and is currently working as a model. (As for her makeover, she dyed her hair back to its original color after leaving the show, although she admitted her "makeover" wasn't too drastic to begin with.) She hasn't returned to New Orleans, having heard from friends and family that it "would only depress her." I sounds like she and her family really lost everything.

I was just as surprised by her elimination as the other callers seemed to be; the judges had so many bad things to say about Jade, and I didn't recall them really saying anything too negative about Wendy. I just didn't get it. So I asked her if the judges or Tyra told her why she was eliminated, and she said no, they didn't say anything. No explanation. How frustrating! "But if I'm ever on Tyra's show, you can bet I'll be asking her!", she laughed. I also asked if she's currently with an agency, and she said she wasn't, since contractually they aren't allowed to join any agencies until after they're eliminated.

After admitting she really has no predictions for who might win this season, the call came to an end. She did manage to plug her MySpace profile during the call, though, so feel free to drop her an annoying comment filled with glittery words, a sound file, and huge photos.

I'll tell you what, though. I'd love to listen in on the phone call with Jade when she gets eliminated.

And she WILL be eliminated.
Posted by Rain at 8:00 AM

you have made the 'blogosphere' your BITCH! awesome.

Wow! Yer famous! How cool that you got to do that.