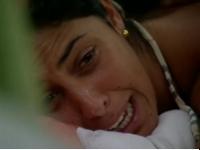 Let me tell you, when Janelle got that phone call from Michael Tuesday night, and the bitterness amongst the friendship began, I was a little scared that we Americans may have screwed up and caused Janelle's ultimate eviction.

Luckily, that didn't happen. So now I can just bask in the glow of Ivette's tears.

Oh man. When April called all the "Big Brother" fans "pieces of shit," and started questioning the character of all the people that voted for Janelle to get that phone call, well, at that moment I was the proudest I've ever been to be an American.
Posted by Rain at 9:00 AM