As we near the end of the countdown, I think it's proper to pay ode to a work of non-fiction that has had, perhaps, the biggest influence on my life.

I am speaking, of course, about The Psychotronic Encyclopedia of Film by Michael Weldon. 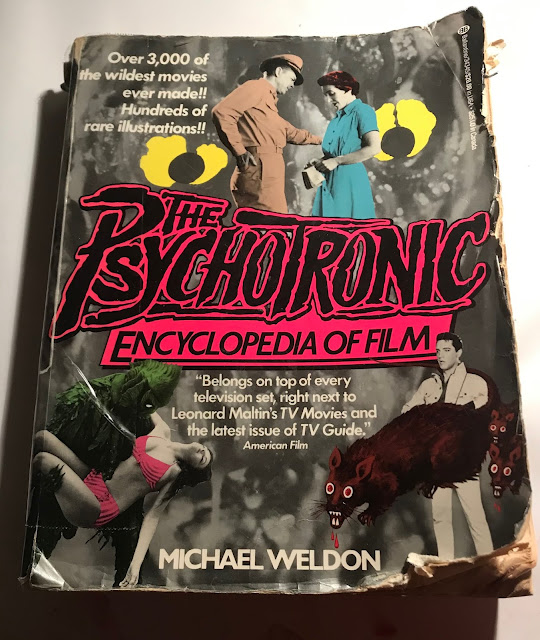 Above is my copy, which is pretty beat up, but in a lot better condition than the first copy I ever read, which my family got the year it was released, in 1983. I believe that copy is held together with tape and kept in a ziplock bag. Since 1983 The Psychotronic Encyclopedia of Film has been my go to whenever I want to learn about some obscure "psychotronic" movie. (Welden released a sequel in 1996 called The Psychotronic Video Guide, which is usually my go to for reading about relevant movies released after 1982.)

I've often wondered where Weldon ended up, and turns out he owns a store in Augusta, Georgia called Psychotronic Records, and now I have a reason to go to Augusta, Georgia. (He also has a website, though it hasn't been updated in several years, and seems to post frequently on Facebook.)

Here's a video from back in the 1980's featuring Weldon bemoaning the gentrification of 42nd street.


There's also some kind of documentary in the works, though I don't see many updates about it on their Indiegogo page. The creators have offered up some video clips about Psychotronic's history, though. Enjoy.

Oh yeah, I remember being around Broadway in the late 70s....scary!

I have a nostalgia for late '70's early '80's New York based purely on the New York-set cinema of that time!