Out With a Whimper 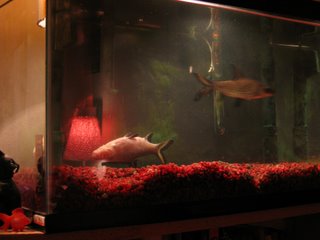 It's New Year's Eve. Some friends are going to be calling me shortly to try and get me to go to a party, but I don't think I'm going to make it.

One of my fish is sick.

I was just telling someone about my amazingly resilient fish. They're over five years old, which I think is pretty old for fish. Granted, I once had a goldfish that lived to be nine, but being that these fish were my first foray into a full-on tropical fish tank, I was sure I'd screw it up somehow and they wouldn't last a month. I was wrong.

They're a couple of bala sharks, and I've loved having them. As their name implies, they look like tiny sharks, and make a cool clicking sound when they eat. Of course fish aren't the most exciting of pets, but that's kind of the point. It was very soothing to watch them floating around as I would drift off to sleep.

But now one of them has the floating-upside-down blues. From what I've read, it sounds like he's got something wrong with his "swim bladder." Oddly, one cure for that is to feed the fish peas. Easier said than done, but I did my best and all I can do now is wait...

It's making me really sad, though. How weird to get attached to a pet that you never actually get to cuddle with or touch. But I have...
Posted by Rain at 9:28 PM