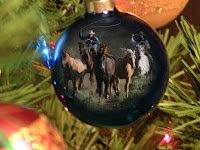 It was the best of times; it was the worst of times. December included Christmas, parties, and other fun. It also included both me and my mother getting laid off from our (unrelated) jobs, and the death of my parents' dog, Dimey. I was kind of glad to kiss the month, and the year, goodbye. But lets look at some of December's more entertaining moments, so to speak.

Movies Seen: Fifteen, with two in a theater. Those two were a "Noir Christmas" double feature at the Castro. Of the two, only "Mr. Soft Touch" was noirish, and only marginally. The other, "Remember the Night," written by Preston Sturges, was a comedy, and not noir at all. Still, it was a fun night at the movies...

Of the home viewed films, "Exit Through the Gift Shop" was the most entertaining, while the Adam Sandler movie "Grown Ups" was the most painful. Shocker.

Books Read: Two. Well, two that I finished. I spent much of the month reading Dickens' "Oliver Twist," as I thought it would be nice to read some Dickens in December. (I swear I came up with that plan before Oprah did.) Alas, it was a difficult read, and I eventually gave up. I know it's a classic and all, but hoo-boy, is it redundant. I just couldn't read about Oliver thinking he's in the clear only to be betrayed and back to a life of misery so many times before it just started to feel like a G-rated version of De Sade's "Justine"...

Ironically, one of the two books I did finish in December was "Black House" by Stephen King and Peter Straub. It's a sequel to their collaboration "The Talisman," and the title is actually a play on Dickens' "Bleak House." I am not sure how much it has in common with that book, (and probably never will) but I can say that like "Oliver Twist" it was kind of tough to get through. Let's just say it was looooong.

Finally, I read one of my Christmas gifts, "Fragments," which is basically a collection of notes, journal entries, and other ephemera scribbled upon by Marilyn Monroe. It probably would hold absolutely no interest to anyone but a Marilyn fan, but I found it pretty fascinating...

Fancy Dinners Out: None! Well, except for a birthday dinner for my mother at our usual, La Traviata.

Live Shows Seen: None! But I did go to the Dickens Christmas Fair again this year, which was fun. More fun than "Oliver Twist"!

Shoes Bought: None! I swear! At least that I can remember...
Posted by Rain at 10:25 PM No comments:

I think I usually post something on my birthday? Yes? I mean, Facebook shouldn't have all the fun. So, here's something a friend posted on my wall, which might make your head explode...

And my all time favorite bit of birthday torture...

Maybe it's just because I will be going to the Greatest Amusement Park Ever at the end of the month, but this sketch on SNL last night made me laugh. A lot.