In February, I continued to enjoy my freedom, and also started my movie review gig for the San Francisco Appeal. Books, movies, fun. No complaints!

Movies Seen: Ten, with one in a theater. That one was "Hall Pass," which you can read about here. Of the DVDs I watched, "The American" was my fave. Yes, it was slow, and some might consider it boring. But sometimes I don't have a problem with slow and boring. Especially when George Clooney is involved. The most disappointing was probably Woody Allen's "You Will Meet a Tall Dark Stranger," which I found utterly pointless.

Books Read: Six. And I joined Good Reads, and started to post brief reviews there, so take a look. And friend me!

"I'd Know You Anywhere" by Laura Lippman was a good crime yarn, and the first in a series of Lippman books I will be reading. She's a former writer for the Baltimore Sun, and is married to David Simon, creator of "The Wire" and "Treme," and so far, I like her stuff. I have a feeling many of the books will be similar, but for now, I'm OK with that. (And really, aren't most mysteries pretty similar?)

"Everything Is Going to Be Great" by Rachel Shuckert is a comedic travel memoir, and it had its moments. Especially everything to do with Holland and the weirdness of the Dutch.

I read Portia De Rossi's "Unbearable Lightness" because I have a morbid fascination with celebrity eating disorders. And the book did not disappoint on that front.

"Room" by Emma Donoghue is a complete page-turner. I read it in just over a day, and couldn't put it down. During some moments, my heart actually started racing. So good!

I was a little let down with Heather Havrilesky's "Disaster Preparedness," because I am such a fan of her Salon stuff, and I don't think it lived up to that. But I still like her a lot, so I will say no more than that.

Lastly was "Half Empty," by David Rakoff, a writer I was unaware of until his appearance on an episode of "The Daily Show." Definitely will be reading more of his stuff.

Fancy Dinners Out: One, at Delfina. I think when I first picked the restaurant, I thought it was Farina, which is a few blocks away. Not that it was a bad choice, as it's pretty famous, and the dinner was very good. They didn't have the pasta dish I wanted (pork ragu, I think?) so I got chicken, which came with this side of olive oil mashed potatoes which were OMGAHHH.

Shoes Bought: None...that I can remember.
Posted by Rain at 9:40 PM No comments:

All the World's a Critic... 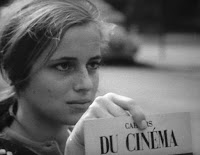 ...including me. Kind of. Actually, I have my own opinions about what film criticism is, and what movie reviewing is, and I definitely fall into the "reviewer" camp. So, yes, I am currently reviewing movies for the San Francisco Appeal, and you should check my reviews out! Below are links to what I've covered thus far. New reviews most Fridays. (Hopefully the movies will get better than they have been...)