A Very Happy Birthday to THIS 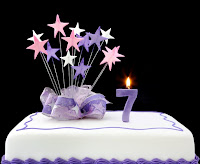 Just realized today is this here blog's seventh birthday. Seven! I have officially been "blogging" for seven freaking years.

Did you know that seven years ago, Facebook and Flickr barely existed? YouTube was a year away from existing? And Twitter was two years away? Take a look back at my first full month of posts. No pics; no videos; nothing but words words words that really looks more like a Facebook News feed than an actual blog, but whatever!

This blog has gotten less attention over the years, but it's still the only place I can come to when I want to spout off about really stupid stuff, and can't limit it to 140 or 420 characters, and for that, I will always love it.

Wow! I'm actually posting this Round-Up on time! As we come to the end of July, (I can't believe August is already upon us!), let me try to remember June. I know the first two days were in New Orleans, and that the remainder of the month was basically me counting down the minutes until I could leave for Palm Springs in July. Still, there was some fun to be had in those intervening days...

Movies Seen: Ten, with five in a theater. The best of those five was "Super 8," which I didn't get to see in advance and review, so instead saw on opening day. I loved it, both because it's a fun movie, and because of the nostalgia it brought up...

I reviewed three of the other movies, so click through to read about "Green Lantern," "Bad Teacher," and "Larry Crowne." (There's also a small blurb about "Trollhunter.")

Books Read: Eight. Four books, and four graphic novels. Of those graphic novels, three were more volumes of "The Walking Dead," and the other was "Mr. Wonderful" by Daniel Clowes, which I really liked, even if it was ultimately kind of depressing, as his books tend to be.

The book-books included "Battle Hymn of the Tiger Mother" by Amy Chua. Yeah. I guess it was a little weird for someone without kids to read a book about extreme parenting, but it was at the library, and so many people have talked about it, that I had to read it. Indeed, her methods are a little frightening at times, but I think it's a lot funnier than her critics realize...

You can click through to read what I thought of the last two books, which were, "Farmer Boy" by Laura Ingalls Wilder, (my re-reading of the series continues), and "Candy Girl" by Diablo Cody.

Fancy Dinners Out: Three. A Dine About Town evening at the Big 4, (had chicken; it was fine); a post-movie meal at Brenda's French Soul Food, (OMG those biscuits; THOSE BISCUITS); and a Father's Day dinner at Town Hall, (and I can't remember what I had. Doh!).

Shoes Bought: One pair. If you know me, you might know that I hate flip-flops, both because I hate their ubiquity, (especially in any setting that is not at the beach or by the pool), and because I hate to have anything betwixt my toes when I am walking. HATE IT. So, it was with much happiness that I was able to find some cute flip flops that DON'T have that toe thing. They're by mel, and they're red, and they have a bow. Perfect!...Almost. After wearing them I realized that the between-the-toe thing is kind of necessary to keep your feet from sliding forward in front, giving you tremendous shrimp cocktail toes.

Whatever. I'm still not going to wear real flip flops.
Posted by Rain at 2:55 PM No comments:

What I Learned on My Palm Springs Vacation 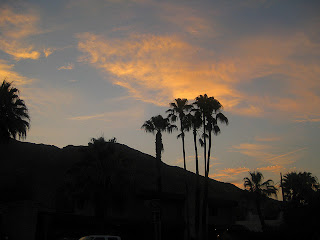 If you follow me on Facebook or Twitter, you're probably sick of hearing about how great my trip to Palm Springs this past week was. Well, suck it, because here's a post about it!

I'll make it brief, though, and follow a format I utilized following my trip to New Orleans, and provide a list of things I learned while basking in the desert.

* On the one hand, I want to tell you where I stay every year to help give the place some free publicity. But on the other hand, I don't want anyone else to go there and make it crowded and gross. So, if you want to know where to stay, you'll just have to ask me...

* Some people go on vacation and dress for comfort. I think taking the opposite approach is better. Dress up and you stand out from the crowd, and you're also likely to get better service because everyone is sick of having to look at other people's feet in flip flops.

* That said, no matter how good those shoes may feel when you first start out for the evening, heat and bare feet are a recipe for blisters. Bring a spare walking pair.

* Being able to get into a pool in the middle of the night, and then step out and not feel a bit cold is total heaven.

* I think being on vacation prevents hangovers because you can't waste any time dealing with it, so your body just skips over that part.

* Roadrunners in real life don't look anything like the cartoon, but they are bigger than you'd think they are.

* Vacationing in a place popular with the retiree set is a sure way to make you feel young.

* Most of the time when I watch Samantha Brown on the Travel Channel, I just get jealous. But I can easily say that I had MUCH more fun in Palm Springs than she did. Watch these two videos, one of her at Melvyn's at the Ingleside Inn, and one of me and Michele dining at the same place, and you tell me who had a better time...

My last round-up was delayed because of a trip to New Orleans. And now this one is delayed because I am about to leave for another trip, this time to Palm Springs. I wonder what will delay the next one?

Movies Seen: Seven, with four in a theater. Of those four, I covered two for the SF Appeal: "Bridesmaids" and "Hangover 2." I saw "Another Earth" at the tail end of the Film Festival, and will probably have a review of that when it opens nationally. The fourth was Terence Malick's "Tree of Life." I saw it at a screening (the same day it played at Cannes, coincidentally) but left for New Orleans before I could review it. Not that I really think I could review it, as I'm still not entirely sure what I though of it. It certainly didn't capture me immediately like "The Thin Red Line" did when I saw it in a theater; I didn't leave looking forward to seeing it again. In some ways, it should have been shorter, (the Sean Penn scenes are the weakest in the movie), but in other ways, I could see an eight-hour version being even better. (And rumor has it, a longer version does exist, and may make it to DVD). Also: dinosaurs. There are dinosaurs in it. For real.

Books Read: Eight. Reading the terrific "The Wilder Life" by Wendy McClure, which is about her obsession with the "Little House" books, and her visits to the historical sites associated with the books, of course got me hankering to re-read the series again, which I indeed began to do, getting though "Little House In the Big Woods," "Little House On the Prairie," "On the Banks of Plum Creek," and "On the Shores of Silver Lake" by Laura Ingalls Wilder in a matter of weeks. (I'm up to "The Long Winter" now, in July...)

All that reading about prairie living compelled me to re-watch the PBS series "Frontier House," which in turn made me realize I had actually bought the companion book when the series was first on, but had never actually read it. So I read that too.

And in between I also got through volumes two and three of "The Walking Dead."

Fancy Dinners Out: One at Commander's Palace in New Orleans. And let me tell you, if you are ever in New Orleans, you have to do this. It's a very famous, old, and popular restaurant, that, unlike some other New Orleans mainstays, actually has fabulous food. Dinner there can be pricey, but the lunch is worth every cent, especially since you can get martinis for 25 of those cents. Yup, 25 cent martinis, of various flavors. I partook, oh yes. A melon martini, as well as a cosmopolitan, to go along with my trio of soups, and entree of cochon du lait with crawfish boudin and corn chow chow. Dessert was bread pudding souffle. I am currently drooling just thinking about it.

Live Shows Seen: One, the San Francisco Ballet's production of "The Little Mermaid." It was intense. They advertise it as not being for younger viewers, but that's not because of anything overtly adult about it. It's just a very intense and kind of depressing version of the fairy tale, and a very well done one at that. PBS will be airing a taped version of it sometime in the fall, I think as part of "Great Performances." Be sure to check it out when it does.

Shoes Bought: Two pair, both at DSW for super cheap. I could not possibly resist these bow-tied flats by Coach. Striped bows!! The other pair are the Meg flat by LifeStride, in navy blue. They were very comfy when I wore them in S.F., but gave me blisters in New Orleans. Synthetic material shoes and humidity just don't mix.
Posted by Rain at 9:55 PM No comments: