July July July. Oh, how I miss July, mainly because I spent a week of it in Palm Springs, and I am still pining for it.

So let's look back on that magic month, shall we?

Movies Seen: Six, with two in a theater. Click through to read my reviews of "Cowboys and Aliens" and "Crazy, Stupid, Love." (You might be surprised to find out which one I liked more.)

The best DVD viewing of the month was definitely "Source Code." Why wasn't that movie a bigger hit?

Books Read: Nine. I wanted to get one more "Little House" under my belt before departing for the desert, and it ended up being "The Long Winter," which is the total opposite of a summer read. Although, I suppose it could help to cool you off by reading about months of relentless snow...

My first poolside read was "All We Ever Wanted Was Everything" by Janelle Brown, which was really silly, but a perfect thing to read by the pool. It kind of reminded me a bit of "Valley of the Dolls," both because of it's kinda bad writing, and because of its subject matter (rich white ladies with drug problems).

Of course, a trip to Palm Springs would not be complete with reading at least one Sookie Stackhouse book, which I did: "Dead In the Family." And if you were to ask my right now what the story was this time around, I would not be able to tell you! Memorable!

Once I got back from my vacation, I just had to check out "Bedtime Stories of the Legendary Ingleside Inn" by Mel Haber from the library since we had a memorable couple of nights in his restaurant. The book is a hoot, mainly because most of the stories he tells are about how he's an easily conned rube.

I actually ended up reading more books after my vacation than on, probably because I just didn't want to leave the house and face the reality of being back home! So, add "The Psychopath Test" by Jon Ronson to the list. I sat down to read the first few pages as I was getting to bed one night, just to decide on what to read next, and I ended up reading it for the next 30 minutes, it was that engrossing.

"The Illumination" by Kevin Brockmeier, was a little less engrossing, and some of the stories within (as it is more a series of stories than a novel) were better than others. Still, I just didn't really think the whole "illumination" conceit worked, or at least, was I wasn't able to get why it needed to be in there at all...

I had been meaning to read "Starting Out In the Evening," by Brian Morton, ever since I saw the movie, and for whatever reason, finally got around to it. It was probably the best book I read in July.

"Ant Farm" by Simon Rich is a series of comedic vignettes, some very, very short, and some funnier than others. Kind of reminded me of Steve Martin's first book, "Cruel Shoes."

And finally, I ended the month with another "Little House" book, this time "Little Town on the Prairie" by Laura Ingalls Wilder. I've only got two more left, and I think I am going to savor them...

Fancy Dinners Out: Five, and most of those dinners were in Palm Springs.

Once again we ventured to Las Casuelas Terraza, not once but twice. I wish I could find somewhere around here that does a chicken ranchero like theirs!

On our second night in town, we ventured to Melvyn's at the Ingleside Inn. Now, I know we had talked about going there in years past, but we never really knew where it was, and never really bothered to look. Turns out, it's a five minute walk from where we stay every year, and it's worth the walk. Totally old school, with great service, tableside prep of things like steak Diane, and crepes suzette, a bar straight out of the 70's, complete with a piano player and a dance floor. We went back two more times (to the bar) and will definitely make it a regular stop on all Palm Springs trips.

We also went to Citron again, where the drinks are always a little better than the food, and the Falls, which also has great (smoking) martinis, and steaks.

The San Francisco dinner was at Zuni where we had the awesome roasted chicken with bread salad. Da-ROOL.

Live Shows Seen: Two! One was at Kimo's to see a friend's band called Complaints and the other was...Dolly Parton! DOLLY PARTON! Enough said.

Shoes Bought: I think only one pair, these espadrille wedges by Calypso for Target, which I found at the Target in Palm Springs, the last in my size, for only nine bucks. See! Palm Springs really is magic!
Posted by Rain at 8:37 PM No comments: 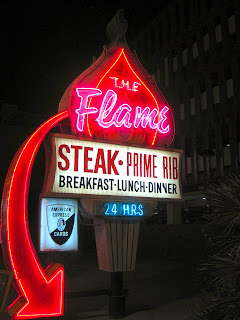