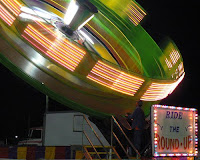 Movies Seen: Thirteen, with none in a theater. My two faves of the bunch were technically "kid's movies": "Ponyo" and "Where the Wild Things Are."

I know it's probably heresy to say it, but I've never been as enraptured by Miyazaki movies as a lot of movie lovers seem to be. Maybe you have to have an inherent fascination with Japanese folklore to really get his movies, or maybe I just don't dig the style that is anime. But "Ponyo" I totally loved. Check out this post on fourfour and you'll get an idea why.

As for "Where the Wild Things Are," it left me cold through most of the movie, but then I got to the end, started crying, and totally got it.

The worst movie was "New Moon." Sorry, "The Twilight Saga: New Moon." I am going to see all the "Twilight" movies, not because I like them, but because I don't, if that makes any sense. Anyway, the point where the movie totally lost me and just started to piss me off was when Bella is with Jacob, the best friend who turns out to be a werewolf, and he's telling her he can never be her boyfriend because he's afraid of what he might do to her, since he can't control his werewolf rage. And she tells him it DOESN'T MATTER. So, basically, she's got two guys in her life who could kill her with the flick of a wrist, tell her it's just too dangerous for them to be together, and shes' all "Oh, but I love you, it doesn't matter." NICE.

Books Read: Three. First was "Lit," Mary Karr's latest memoir. I've read "The Liar's Club" but not her second memoir, "Cherry," but I don't think you need to read either of those to read "Lit," since she kind of goes over what was covered in those books a bit. The main story is about her getting sober. She's an amazing writer, so even if stories about drunks finding God aren't you're bag, it manages to engross.

The second was "Eating the Dinosaur" by Chuck Klosterman because I have to read everything he writes. Except anything about sports, which means there were parts of "Dinosaur" that I just skipped. And speaking of skipping over stuff, much of "Shelf Discovery" was skipped over, too. The book is a series of essays about classic young adult novels. You know, stuff by Judy Blume, Lois Duncan, and Louise Fitzhugh. I didn't have much interest in reading about books I hadn't actually read, so that's why some of the book was skipped over. But I was surprised by how many books I had read were covered in it. It was a nice trip down memory book lane.

Fancy Dinners Out: None. Not really. One birthday dinner for my dad at La Traviata, and one grilled ham and cheese at The Big 4.

I know it seems like I've been neglecting this blog, and, well, I guess that's true. But that doesn't mean I don't write anymore! I just continue to write for other sites. My daily TV picks are still going up every day on the SFGate Culture Blog. You should read them! Also, the San Francisco International Film Festival is going on, and I am going to a few movies and events, and writing about them for the San Francisco Appeal. You should be reading the Appeal daily anyway, but now you can also read some of my stuff, too! Like this post about Walter Murch's State of Cinema Address, which I attended on Sunday.