Movies Seen: Ten, with five in a theater. Five! That's mainly because of the San Francisco International Film Festival, some of which I covered for the San Francisco Appeal. Those movies were (click links to read my coverage): "Gainsbourg (Je t'aime...mois non plus)," "Cairo Time," and "Get Low." I also attended a talk by Walter Murch.

The other two theater going experiences were "Hot Tub Time Machine," which I liked just fine, and a 1977 horror movie from Japan called "Hausu." THAT was insane. I had first heard about the movie via Rich Juzwiak's fourfour blog, and after reading that (I highly recommend you do, too), I knew I just had to see it. Luckily, it arrived in San Francisco for a one night showing at the Castro, and I'm glad I caught it there, because it was a lot of fun seeing it with a crowd. The collective "OMGWTF!!" reaction was a hoot. The minute this comes out on DVD, I am buying the hell out of it.

As for my DVD watching, none of those were really worth mentioning.

Books Read: Four. First was "The Likeness" by Tana French, a sequel to "In the Woods," which I read last year. Alas, I did not like this one as much as that one, mainly because the central premise is so absolutely preposterous that I just couldn't get over it. I kept hoping there would be a logical explanation, but--and I am trying not to be spoilery here, although this may count as one--there isn't. And that kind of tarnished the whole book for me...

I got Dave Eggers's "The Wild Things," which is basically Eggers's novelization of the movie version of "Where the Wild Things Are," as a Christmas present, and have to say, it's the best feeling book I've ever read, as it's covered in fake fur. I almost slept on it as a pillow. The book itself is OK. I waited to read it until after I had seen the movie, and it's pretty close to it, but of course goes deeper in Max's mind, and the personalities of the Wild Things. But the movie is probably better.

Another present, this time for my birthday, was A.J. Jacob's "The Guinea Pig Diaries." In his other books, ("The Know-It-All," and "The Year Of Living Biblically"), Jacobs spends a year undertaking respective "experiments," but in this one, he spends at most a few months doing such things as living according to George Washington's personal rules, outsourcing as much of his daily routine as possible to a team in India, and doing everything his wife tells him to. (And believe me, she earned that one.) His books are always fun, and this is probably a good introduction to his stuff to anyone interested in reading him.

And I finally read Carrie Fisher's "Wishful Drinking," which took about two hours to finish, which is probably the same amount of time it would take to see her stage version of the book. I am not sure which would be funnier, though...

Fancy Dinners Out: One, at Town Hall. Mmmmmm....Town Hall. I had the fried chicken, but I envied my friend's smoked pork chop, and really should have gotten that. I now know to never pass up the chance to eat smoked pork.

Live Shows Seen: None, although I did go to WonderCon, which is always quite a show. And the aforementioned Film Festival stuff as well....

Shoes Bought: None, that I can remember. And if I have shoes I don't remember buying, that's probably a bad thing...Oh! I did buy a pair of slippers! I have a cat, so I always have to wear something on my feet in my apartment (because of litter, mainly, but also because of other surprises she leaves around the place), and I usually wear slip-ons. But I was getting so tired of litter getting into the slippers (nothing worse) that I decided to get some slippers that were snugger and offered more foot coverage. Thus: these Isotoners. No more litter slippers!
Posted by Rain at 7:38 PM No comments: 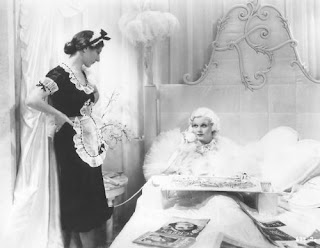 First off, get a grip people. "Sex and the City 2" is not the worst movie ever made. It's not even the worst "Sex and the City" movie ever made. It seems many critics, both professional and non, have taken a dislike of the movie as an excuse to vomit bile all over the entire franchise, aging women, and the aging women who would dare to love the franchise. From the reviews I've read about how vain, vapid, and offensive the movie is, I was expecting to see the four friends arrive in Abu Dhabi, slap people in the face with their designer bags, and immediately expose their vaginas to the entire country. That doesn't happen. Nothing remotely like that happens. What the movie is, is a nice romp, expressly aimed at women, that is about as realistic as any of the black-and-white, high society-set, Depression-era movies Big loves to watch while curled up on his $10,000 couch. And there's nothing wrong with that.

Now, I am not an apologist. I really, really didn't like the first movie, but that was mainly because of the story it chose to tell, not because the characters are materialistic, self-centered, or unrealistic. If you're looking for realism from a show about a newspaper columnist who lives in a New York brownstone with a walk-in closet, you are looking in the wrong place. "Sex and the City" has always been fantasy; a modern-day fairytale filled with emotional truth. And it's straight up for women. I have deep respect for any guys who watched and liked the show, but I realize they are few and far between. And that's OK. They have an entire summer of movie choices filled with fantasies tailored for them. S0, if there are any critics out there left who have not seen the movie, and were not fans of the show, please, don't bother. The movie is not for you.

So yes, the crowd tonight was predominantly female, and many chose to dress up, (though not as many as I had thought would), and they all seemed to have a great time. I know I enjoyed the opportunity to hang out with three of my best girlfriends, and be pleasantly surprised by something we were all told was going to be a total disaster. The only disappointment: how the restaurants in the Westfield Mall didn't choose to stay open a little late, knowing they were going to have hoards of women coming out of the theater all night, in desperate want of a Cosmopolitan. There's a reason "Sex and the City" is set in New York: LATE NIGHT DINING.
Posted by Rain at 12:45 AM 2 comments: