Well, I never did get around to expanding January's Round-up. Bad on me. But who cares about January anymore anyway? It's almost April, which means we need to talk about February!

Movies Seen: Ten, with one in a theater. The one theater outing was "Shutter Island." Of course! There are few directors that will always compel me to drag my ass to a theater to see their movies, and Scorsese is one of them. It wasn't one of his best, by a long shot, and, ultimately, I think the whole thing was kind of silly. But a little while after seeing it, I began to think it might be interesting to see it again. I won't say why, (you'll know why if you saw it), so I might actually have to add it to my collection when it comes out on DVD.

Speaking of DVDs, I actually watched more movies via Netflix's Watch Instantly offerings on my TiVo than I did actual DVD movies in February. The one I liked the most? "Ice Castles." YES, the 1979 movie about an ice skater who goes blind and continues to skate. What can I say? I was swept up in Olympics fever, and I will always love that movie, no matter how awful it is. (And it is awful.)

As for awful and no fun, that award goes to Lars Von Triers "Antichrist." Maybe I just didn't understand it, I'll own up to that. But aside from some stunning visuals, it's an exceedingly unpleasant movie-watching experience. And it will cause you to grab your crotch in sympathetic pain. (Yes, women and men both.)

"Commited" is the follow up to the insanely popular "Eat, Pray, Love," which I read before it became insanely popular, and as a result I was a little surprised by its popularity. But I won't go into that here. This one was a best-seller, but I don't see it reaching the longstanding popularity of "Eat..." simply because it's even more self involved than that one. I know I wasn't that engrossed in her opinions on marriage...

As for the "Good Omens," I read it because I am a fan of all things post-apocalyptic. But this one is actually pre-apocalyptic, so not quite up my alley. And it's really, really British...

Fancy Dinners Out: Two. One at "Wexler's," again. I'm a sucker for all things smoked, I guess. And when we were there, they were taping some TV show, so don't be surprised if you see me on TV stuffing my face with pork at some point. (That was bound to happen eventually, let's face it.)

The other was during a trip to Disneyland, our traditional meat feast at Steakhouse 55. I had the prime rib and a Ceaser salad, plus we got a free dessert because I lied and said it was my birthday. (Well, the trip was kind of a delayed birthday celebration, so it was only a little lie.) I was sad to learn they had removed their souffle dessert from the menu. It came with this cream anglaise you poured inside and OMFG it was so good. WHY STEAKHOUSE 55, WHY?!

Live Shows Seen: One, sort of. I got tickets to a taping of "Important Things With Demetri Martin," (the same week I ate at Wexler's, which means I was around TV cameras twice in one week). It was an interesting experience. I realized I have a really hard time not looking directly into a huge video camera if it is pointed at me. I can't help it. I'd make a lousy extra.

Shoes Bought: One pair. Some basic black Keds that gave me blisters the first time I wore them without socks, but seem OK now.
Posted by Rain at 8:45 PM No comments:

I was watching Rob Corddry on "The Martha Stewart Show" promoting "Hot Tub Time Machine," (which I have an unhealthy desire to see; who's with me?!), and making ice cream sundaes, and I remembered this bit he did years ago on "The Daily Show," where he went back to his hometown of Boston and revisited the traumas of his youth. The phrase "C'MON CORDDRY!" has, ever since I first watched it, entered my vernacular, although I find I have very few opportunities to actually use it.

I present the segment to you below.

I don't have that much to say about the Oscars. I thought Alec Baldwin and Steve Martin made excellent hosts, and I wish there had been more of them. I thought the costars gushing about the Best Actor and Actress nominees was a nice thought, but horrible in actuality. I thought the snubbing of Farrah Fawcett in the memorial section was unforgivable. I was happy that "Avatar" was snubbed for all the important things. And I thought this was the funniest moment of the night.

As for the Oscar menu, here's what we had: Precious gin and tonics based on a gin by Sapphire; Avatunatartar; Serious Manwiches featuring Distric 9 prawns on an Inglourious Batard; a Blind Side-salad; bags of Up in the Airline Peanuts. And (Irish) car bomb cupcakes in honor of the night's big winner. I guess one could say putting that menu together was a hell of An Education...and yes, there were balloons all Up in there.

And my tally? Seventeen out of 24 guessed correctly. I won our small pool, but I've done better.
Posted by Rain at 10:13 PM 1 comment: 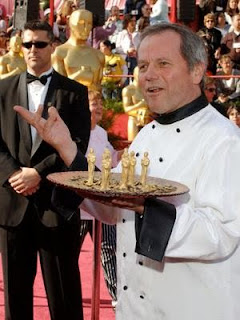 I'm sure someone out there can do better. Spill it!
Posted by Rain at 12:19 PM No comments:

This is just too perfect. On Saturday, I was watching some of the very CNN stuff Jon Stewart talks about in this clip and, since I don't normally watch a lot of CNN, I kept asking myself what the hell that Rick Sanchez dude's problem was. Stewart nails it.