January was my first full month of freedom from work, and I began it by getting sick. Doh! Actually, that wasn't so bad. I was only really sick for about two days, and I was able to just get through it without the associated worry and guilt about missing work. Once I felt better, I did my best to take advantage of my new found freedom with lots of daytime adventures: lunches with friends, and even some mini-trips, including an overnight in Monterey, and a weekend in Disneyland. Aside from some lingering worries about the future, it was a pretty great month!

Movies Seen: Eleven, with two in a theater. The two theater viewings were "Black Swan" and "True Grit." I liked "Black Swan," even if it was a tad silly, but liked "True Grit" even more. That movie proves it's better to remake bad films than good ones. (Although, I don't technically think it's a remake. Since both are based on the same book, it's more accurately described as another adaptation.) Of the DVDs, (or VODs, as it were), I watched, the best was "Inception," although I wasn't as blown away by it as others seemed to be. The worst is a toss up between "Dinner For Schmucks" and "Buried." "Buried" probably pissed me off more, but I can't really say why without spoiling the movie.

Books Read: Six. Six! Six books! In one month! The first was "Talking to Girls About Duran Duran," by Rob Sheffield. I read his "Love Is a Mix Tape" in one night, so I was anxious to read this one. It's not quite as engrossing, but anyone who grew up in the '80s and had even a passing interest in music will probably find it a good read.

The next was "Gunn's Golden Rules" by Tim Gunn, and I read it in one day, the first day I was sick; I just lay in bed all day reading it. The biggest irony about the book is how he talks a lot about how you should treat people well, and be kind, while also dishing a WHOLE LOT about badly-behaved celebrities he's met. Sure, the behavior he describes is worst than the act of gossiping he's displaying, but still...

Next up was a Christmas gift: "Rat Girl" by Kristen Hersh. It's a memoir about the year she got a record deal with her band, Throwing Muses, found out she was bipolar, and got pregnant. Oh, yeah, she was also a teenager at the time. Whoa! Biggest revelation: She was good friends with aging former movie star Betty Hutton. Weird!

Steve Martin's "An Object of Beauty" was another book I read in about a day. The best thing about it was his inclusion of images of all the paintings and works of art he talks about in the book. It helped me avoid a bunch of Googling as I was reading it.

"A High Wind in Jamaica" by Richard Hughes is a book I had never heard about until a friend gave it to me for my birthday. It's basically a story about a bunch of kids who are kidnapped by pirates, but end up being far scarier and amoral than the pirates holding them captive. It's pretty great.

Lastly was "I Remember Nothing" by Nora Ephron, a collection of brief but amusing essays. And when I say brief, I mean, some of the chapters are just lists of things. Brief.

Fancy Dinners Out: Four. Birthday month! First was dinner at the Buckeye Roadhouse in Marin. We had an amazing oysters appetizer and I had a pork chop entree. Delish. But the highlight was the S'mores pie. I am drooling just thinking about it.

I had my usual birthday night dinner at La Traviata, and then that weekend I was off to Disneyland. There we had two kinda fancy dinners. The first was at DCA's Wine Country Trattoria, where we partook in the the prix fixe deal that also gets you priority seating at the World of Color. The dinner itself was OK, but the highlight was definitely dessert, in which you are not given a choice of desserts; you are given ALL THE DESSERTS. For reals.

Lastly was dinner at the Disneyland Hotel's Steakhouse 55. I got a prix fix menu that included a flat iron steak, a cut I had never heard about, that turned out to be AWESOME. It's now something I will order anytime I see it on a menu.

Live Shows Seen: Well, does "The World of Color" at Disney's California Adventure, and "Fantasmic!" at Disneyland count as a live show? I mean, at least one involved live performers and jazz hands, so I think so...

Shoes Bought: One pair. I had been waiting for these Isabel Toledo for Payless shoes to go on sale for a while, because as much as I love them, I was not willing to pay close to 50 bucks for a pair of Payless shoes. Thankfully they were marked down considerably, and just in time for my birthday. I wore them at my "party" and, miraculously, didn't fall once!
Posted by Rain at 8:33 PM No comments: 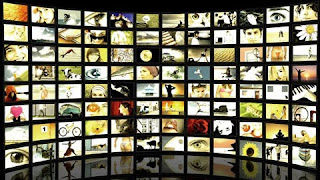 So, me and TV aren't through. Not nearly. But unless I get another job that requires me to sit in front of computer screen for eight hour stretches, I think my TV gluttony has come to an end...
Posted by Rain at 3:26 PM No comments:

Email ThisBlogThis!Share to TwitterShare to FacebookShare to Pinterest
Labels: Me Me Me, State of TV
Newer Posts Older Posts Home
Subscribe to: Posts (Atom)