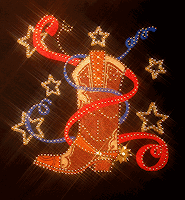 Movies Seen: Twelve, with three in a theater. One of those three was a Dutch film called "Can Go Through Skin," and you can read my review of it at the SF Appeal. "Star Trek" was another, and while I enjoyed it a lot, a lot of it also bugged the hell out of me. The good stuff: Any time the show made overt reference to the original series, especially whenever lead actor Chris Pine channeled William Shatner. The bad stuff: All the unnecessary shaky-cam work, especially when used in combination with extreme close-ups on actors faces. That's just a bad combination. There was also a comedic amount of lens flare in almost every scene.

As for the DVD movies viewed, my favorite was probably "Wendy and Lucy," (not to be confused with former Prince band members Wendy and Lisa), which is a really small and simple movie that manages to do in 90 minutes what numerous movies fail to do in a bloated two-plus hours, namely, make you care a whole hell of a lot about a character. I loved it for its simplicity.

Books Read: None! Actually, that should be "Books Finished: None," because I did spend the entire month of May reading one damn book that I just didn't like very much, but by the time I figured out I didn't like it, I was already half-way through it and figured I had invested this much time, so I might was well finish it, so I kept reading it, flipping it the finger the entire time. Also, the book is kind of a murder mystery, and I wanted to find out who did it. And that's all I'll say about it until next month's Round-Up, except to tell you the title of the book, "The Little Friend" by Donna Tartt.

Live Shows Seen: One, Ben Folds at the Fox Theater in Oakland. For those who have not been to the newly refurbished Fox Theater, you should. I wish I could see every concert from now on there. It is a mere block from BART, incredibly comfortable, beautiful, and they sell pulled-pork sandwiches. 'Nuff said.

As for the show itself, well, I like Ben Folds a lot. So I liked the show a lot. Kind of a boring review, I know....Oh! He did bring out an acapella group from Sacramento State beforehand. They're a part of the album of acapella Ben Folds tunes he released, and I know acapella groups are supposed to be the pinnacle of dorkitude, but I was so impressed by them that I ended up buying the entire record. Here's the song they did.

Shoes Bought: One pair: These slingback wedges from Target. Perfect for Palm Springs, which is where I will be going in...11 days! Woooo!
Posted by Rain at 9:42 PM No comments:

Am I the only one who thinks the LA Times front page image choice is a little...ghoulish? (Click on the image for a larger view.) 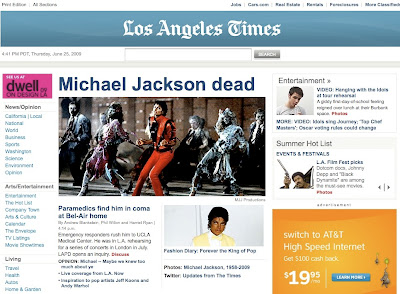 I mean, I guess we should just be thankful they didn't run a picture of him in the zombie make-up.
Posted by Rain at 4:49 PM 1 comment:

Dallesandro
Originally uploaded by Hilly_Blue
I've got a review of the documentary "Little Joe" up on the SF Appeal right now, and I am posting about it here just as an excuse to add this image to my blog, for all posterity.

And while you're at the Appeal, you might as well check out my take on the new reality series "NYC Prep."

And don't forget my daily posts on the SFGate Culture Blog!

/self promotion mode
Posted by Rain at 9:41 PM No comments:

Sadly, He Did NOT Run Into the Woods to F*ck a Coyote

The real story is a lot less amusing, and, dare I say, BORING in its cliches.

But it was fun to pretend for a while.

"Have you ever heard of 'insect politics'?"

It may look like I'm taking a break from blogging or something, but that's just not the case. I just haven't posted stuff here as much. So this is a reminder that you should be reading my "Hey, Watch It!" posts every day on the SFGate Culture Blog, and I also have a bunch of movie and TV reviews over on the San Francisco Appeal. So go over to both those places and catch up. Now. No, now!

Then you can come back here and watch these totally NSFW videos featuring The Muppets.

In my "April Round-Up," I stated I didn't buy any shoes. This is, in actuality, not true. In fact, I bought TWO PAIRS!

They were both bought online from Target, for cheap (I think they were both 50% off at the time), which is probably why I forgot about them. And one of the pairs I doubt I'll ever actually wear, as they are a lot taller and unwieldy that I thought they'd be. They're also pretty freaky looking. To wit.

The other pair I only wore once as the one time I did wear them, I ended up tripping on a sidewalk, which resulted in this lovely bit of black-and-blue toeness. Probably not the shoes' fault, although they weren't as comfortable as one would think looking at them.

Email ThisBlogThis!Share to TwitterShare to FacebookShare to Pinterest
Labels: Me Me Me, Round-Ups

I Done a Good Thing

While I was watching "Up" this weekend, (which is awesome, and you should see it right away, although don't feel compelled to see it in 3D; it doesn't really add much to the experience, and I think if I do see it again in a theater it will be in regular D), I was vaguely reminded of a Looney Tunes cartoon during all the scenes with Dug the talking dog, and his fellow army of talking dogs. And because I am brilliant, I was able to figure out just what cartoon it was. It's called "Foxy By Proxy" and I bet dollars to donuts the guys at Pixar were at least partially influenced by it. Watch it below.