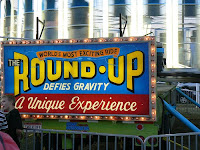 Once again, the end of the month sneaked up on me. I can't believe it's already April!

Let's get on with it, before it's May.

Movies Seen: Nine, with one in a theater. That one was Safe House, and you can read my review of it here.

Of the DVDs I watched, the best two were documentaries, and they're both terrific. Being Elmo brought tears to my eyes about five minutes into it, and Resurrect Dead: The Mystery of the Toynbee Tiles is just fascinating, but is probably better if you don't really know much about it going in.

Being Elmo is going to be PBS this Thursday at 10 P.M. Watch it!

Fancy Dinners Out: Two. I'd never been to Bar Agricole before, and it was very good, although I can't remember what I ate! I know I drank an Old Fashioned that had one gigantic ice cube in it. The restaurant itself has a lot of concrete and wood, which, yeah, I realize most buildings are made out of concrete and wood, but the decor of this one just seemed a little off to me. But they have a large outdoor dining area that could be nice on a warm day. It was the first time I'd been in that area of SoMa in many years, and I was surprised by how dead it seems. It used to be the center of San Francisco night life, and now it feels like a ghost town.

The other dinner was at the new version of Original Joe's, now in North Beach. It's a testament to the quality of the restaurant that even though the chicken parmigiana I ordered was partially raw, I'd still go back in a heartbeat...

Shoes Bought: Four pairs!  I got these Vince Camuto leopard pumps at Macy's for under 30 bucks.

These Lela Rose heels were only 19 bucks at Payless, and I also got a pair of silver flats there for about 10 bucks.

And finally, I scored the last pair of these super cheap green faux suede flats at H&M.

The above is a clip from the movie Bully, which opens this weekend, and which you might have heard about because of issues with the MPAA, and how they want to rate the movie R, because of swearing, thus making it harder for the kids who could benefit from the movie to actually see it. (For example: Most schools won't be able to show an R or unrated movie to an entire school without getting permission from each and every parent, and they'll likely see that as more bother than it's worth.)

The clip is actually edited down from how it appears in the movie, (I haven't seen the movie, but saw the extended clip on the "Anderson" show this week), and it's even more maddening in its entirety. That a teacher, (and actually, I think she's an assistant principal), would chastise a bullied kid for being rude to his bully is just...I don't even know what else to call it but totally fucked. (Rate THAT R!)

I don't know if I'll go see the movie, because the clips I saw on TV immediately made me cry. I tear up just thinking about them now. And it makes me glad I don't have kids, because having to deal with the heartbreak of having a bullied kid OR a kid who's a bully would just be too much to bear. And this is coming from someone who was both growing up.

The clip up there strikes a certain note with me because in grammar school, I was bullied by kids and a teacher. And in a way, the stuff with the teacher was worse.

The kid stuff started around the second grade. I don't know why I was singled out. Maybe it was my name; maybe it was because I was bigger than the other kids, who knows. (And while I was big, I would have been considered svelte next to kids the same age these days.) During that grade, a girl decided to get a bunch of her friends together and sing me a song about how none of them wanted to be my friend anymore. I believe it was to be sung to the tune of "Hello, Dolly," but the title was "Goodbye Rain," (clever!). Such an elaborate bit of bullying theater, and if it wasn't such a sick thing, I'd almost commend her for having such creativity at such a young age.

Fortunately, our teacher found out about it, (perhaps someone snitched), and she prevented it from happening. But she didn't prevent the girl from putting the lyrics to the song, all very nicely written out and decorated, in my backpack so I could discover it when I got home.

In another grade I had a "best" friend who would, purely based on her whims, decide day to day whether or not she was going to be nice to me, or, along with her friends, torture me. I never knew if a day was going to be a "Be Nice to Rain Day," or "We Hate Rain Day." On the Hate days, I would be hit, threatened with ass-kickings after school, taunted, or just given the complete silent treatment. Welcome to the birth of my neuroses!

Finally, I eventually got to a grade, fifth, where I didn't seem to have any active bullies, and in fact had a bunch of friends. Unfortunately, my teacher hated me. Now, I will admit I was a bit of a wise-ass and a know-it-all, and was probably annoying as hell. But she was an adult, and a teacher, and really should have been above bullying tactics. Tactics like the time there were class elections, and I was voted class president, but she decided to basically veto that vote, give that position to someone she liked, and demote me to "hall monitor," or some such bullshit.

Or the time the class put on a play, The Wizard of Oz, and we all auditioned, and I wanted to be the Cowardly Lion, and could imitate the crying Bert Lahr does in the movie to a T, but she gave the role to someone else, didn't give me a part at all, and made me a line prompter. Or some such bullshit.

Or the time she told the parents of one of my best friends that she shouldn't be allowed to hang out with me anymore because I was a "bad influence." I was NINE. The only thing I was influencing her on was to not like the teacher, which, can you blame me?

Or the time we were on a field trip, and we were all waiting for the bus, many of us students just kind of milling around the teacher, vying for her attention and approval, as young students are wont to do. And some kids were asking her if she thought they were smart enough to get into such and such a school, and she said to each of them, "Yes, oh yes, of course!" And when I asked her she said, "You? No way. Never."

Who do you go to when your teacher is bullying you? Back then, there was nothing I could do. I told my parents, and they had a teacher conference with her--as all parents did, at least once a year--but really, what were they going to say? I know my mom said she came out of the meeting wanting to stick an electrical plug into the teacher's nose, but, alas, she wasn't able to follow through on that.

When I finally got out of her hell class, and moved on to junior high, where it felt like a fresh start, and I could be whoever I wanted to be, well, I did what a lot of bullied kids do: I became a bully.

I was horrible. Just awful. I never hit anyone, or threatened them with violence, but I was a bitch, and cruel, and mean. I'm completely ashamed of it. That I eventually became good friends with most of the girls I bullied is testament to their being superior lifeforms, hands down.

A lot of people who come out of bullying say it made them better people, and who they are today; they came out of it stronger, and that most of the biggest successes in life are the people who were considered weirdos when they were kids.

But that can be minor consolation to a kid who's being bullied in the here and now. I wrote all this stuff down, and am sharing it, because I think it is always helpful to have stories about surviving bullying out there for anyone who might need it. And not to get all, "it gets better," but, it did. By the end of junior high, I was free from bullying--both of and by me. And by the time I got to high school, I didn't give a shit about anything anyone had to say about me, and as a result, no one really said anything about me. In retrospect, high school was a piece of cake, socially, though sometimes I wish my bullying years had been later in life, because I don't think it would have affected my core being as much as it did happening to me so young.

The presence of the Internet and social networking has added a whole new level to bullying, to the point where the only previous respite from school bullying--being able to go home and get the hell away from it, at least for the night--no longer exists.

But the Internet has its counter benefits. Kids can reach out to people who are feeling or felt just like they are, who can tell them that they are great people, and the bullies are complete and total assholes who are going to lose at life. At least kids can get some support outside of their family, because sometimes validation from complete strangers can mean a lot.

So if, for some completely bizarre reason, there's some bullied kid out there reading this, let me know.

And maybe we can write a song about it...