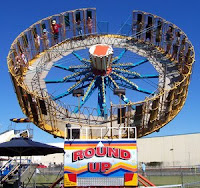 July was kind of a rough month for me, so let's look back on June, which was a little more light-hearted.

Movies Seen: Eleven, with one in a theater. That one was "Toy Story 3," which I loved. Of course. Pixar continues to hit it out of the park, and cause me to laugh and sob in the company of strangers.

None of the DVDs I watched were very memorable. I re-watched "Shutter Island," and found it was actually a more interesting movie this time around. It's definitely a different experience watching it a second time, so to anyone who didn't like it much on first viewing, I do recommend seeing it again...

The most disappointing movie was definitely Tim Burton's "Alice in Wonderland." I suppose I am not surprised I didn't like it; I've been nothing but disappointed by Tim Burton's movies for years now. I was just a little shocked at how pedestrian the story was. How can you take something as wonderfully wacky as the "Alice" books and turn them into something so cliched? I will admit I laughed a few times at Helena Bonham Carter's Queen, but really, she was the only source of merriment in the entire bleak and depressing thing.

Books Read: Three. Most of the month was devoted to finally getting around to reading Stephen King's "Under the Dome." I'm a veteran when it comes to gigantic King books. The first time I read "The Stand," I think it took me four days. And I read "It" in a weekend. Alas, this one took me longer to finish than the timeline of the book itself. (Yes, the huge tome spans only one week!) Ultimately, I did enjoy it, but I kind of wished he'd avoided an explanation for the dome that covers the small town, (I suppose any kind of explanation would have seemed preposterous, but what he went with was particularly silly), and if you're wondering if this one ends like many King books do, with a huge explosion or fire of some kind, the answer would be yes.

Also, reading this book was the only time I've even considered reading an e-book instead, because it was the hardback version, and as I mentioned, it's big. It's a bitch to lug around, and I do carry a book with me almost all the time, especially to and from work, as I read on the shuttle. So, I was prepared to buy the e-version for my iPod, just for those commuting moments, only to find Amazon was charging more for the e-book than I paid for the actual book. Why, oh why, do they not offer an e-book for free--or at least at a discount--if you've purchased an actual real version of said book already? Someone get on that, OK?

I also read Molly Ringwald's "Getting the Pretty Back." SHUT UP!

And finally, I read Daniel Clowes's "Wilson," which I found kind of...confusing. I liked it, laughed several times, and ultimately found it poignant. But his decision to do each comic in a different drawing style--that does not really have anything to do with the content of the comic itself--kind of baffled me...

Fancy Dinners Out: Four. Dine About Town happened again, so I took advantage of that a few times. Once at the Big Four restaurant, which I recommend, because it seemed a really good bargain compared to their usual menu prices, and the portions were huge. The other was at LarkCreek Steak, which was also very tasty, although the menu choices seemed a little limited.

As for the non-Dine About Town meals, one was at Baker and Banker, where I had a sweet corn bisque that I can remember liking, and something else that I remember liking, but can't remember what it was. I think it was a salad? The other was a Father's Day dinner at Town Hall. Once again, a fab meal was had there, and, once again, I got the jalepeno cream ham and egg app as my entree, but we also had their version of barbecue shrimp as an appetizer, and man, that was GOOOOD.

Live Shows Seen: One. Goldfrapp at the Fox. This was the first time I kind of regretted getting balcony seats (which I tend to prefer because I am old), because it just felt weird sitting there and watching when what she was performing was mostly dance music. But we did get up and boogie a few times, as much as that could be done up there. I thought the show was great, and it pleases me to no end that she is older than I am, and so utterly awesome.

Shoes Bought: One pair, these sandals, in turquoise, which I bought for the sole purpose of wearing during my Palm Springs vacation in July. They were selected because I liked the color, and also because they weren't designed like thongs. I can't abide thongs or thong-like sandals for a variety of reasons, but the main one is I cannot stand having something wedged between my toes. Drives me NUTS. So these were nice and kind of plain, and worked out well on my trip...
Posted by Rain at 11:45 PM 1 comment:

We Interrupt This Vacation to Bring You This Ridiculous Message

I Write Like by Mémoires, Mac journal software. Analyze your writing!

In my post about "Little Darlings," I talked about how the movie came out in 1980, and how that meant, if I saw it the year of its release, I was only 10 at the time. Now the Internet is talking about the 30th anniversary of the movie "Airplane!" and I know for a fact I saw that in a theater when it came out, and I was with friends. I can even remember the theater: It was the Royal on Polk Street, and we sat in the balcony. (Alas, the theater is gone now, which is sadly the case with almost all of the movie theaters of my youth.) I think we may have stayed and watched it twice. And it may not have been the first time I had seen it either, as I recall seeing it with my parents as well.

I don't have a point, really, except to say that yes, indeed, I did go to the movies with friends, unaccompanied by adults, at the age of ten. Which I think is pretty awesome. Also, it's an excuse to include this compilation clip featuring my favorite "Airplane!" character.

"Wet Hot American Summer" is one of those movies I appreciated more than I liked. I adore what it was trying to do, and it spoke directly to my nostalgia. But it just wasn't as funny as I had hoped it would be. The opening credits though? Five stars.