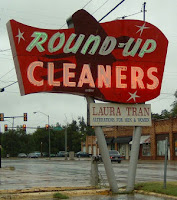 You know, I can't really believe June is over, because it really, really feels like the stuff I did in May just happened. Before I know it, my vacation will be over, and it hasn't even begun yet. Oh, time!

Movies Seen: Eleven, with one in a theater. That one was "Sex and the City 2," which I discussed here. Of the DVDs I watched I was most pleasantly surprised with "It's Complicated." Sure, it's not exactly a deep movie, but I found it quite funny. Meryl Streep has one line in it that had me laughing so hard I had to pause the movie until I'd stopped...

The worst was probably "Nine," the musical. It reaffirmed why I don't like most musicals, and was just so damn dumb that I couldn't believe that the talent involved didn't have at least ten other better things they could have spent their time on.

Books Read: Three. The first was "The Diary of a Young Girl" by Anne Frank. I had read it in school, as everyone seems to be required to, but it was the shorter "abridged" version, so I finally got around to reading the longer, uncensored version. I am sure there is still some stuff that was left out, but it's definitely a different book than the one I knew. But it is no less heartbreaking.

One might think moving from the diary of a girl who basically starved to death, (that wasn't the official cause of death, but it was a contributing factor, all things considered), to the memoir of a woman who almost starved to death to become a model, to be a bit...tacky. But whatever. "Hungry" by Crystal Renn was a quick and entertaining read for anyone with a morbid fascination with eating disorders and the world of modeling. Plus Renn is a pretty good writer.

And it was purely by accident that the next book I read was "Women Food and God" by Geneen Roth. When you have books on reserve at the library, you read them when they come in, not by choice, really. The thing is, I have no idea why I had put this on my reserve list in the first place. I must have read something favorable somewhere and compulsively added it. So it was kind of alarming when the day after I started reading it, the author was on "Oprah" to discuss the book. Oprah loves it. I did not. Perhaps if I felt I had some of the food issues that were addressed in the book, I would have found it enlightening. But for me, the issue is simple: I love food. I eat too much of it. So now I try to eat less of it, and try to exercise more. It's a simple thing, really. Now, I acknowledge for some women it is a much bigger issue than that (see Renn, Chrystal, above), but the touchy feely approach in the book really did nothing for me...

Fancy Dinners Out: One, in Santa Cruz, at the restaurant Aquarius, which is in the Dream Inn hotel off of the Boardwalk. I highly recommend it. The place itself is lovely, with amazing views of the beach and the ocean, and the food was delicious. We were there for lunch, and it was reasonably priced for what you got. I had a seafood Louie salad, which was dressed perfectly, and full of really tasty crab. I think the hotel would probably be a fab place to stay as well, as they say all the rooms have an ocean front view, and the decor is a play on mid-century modern.

Live Shows Seen: None, although I did go to a high school graduation and a baseball game. Do those count?

Shoes Bought: One, a pair of these Ballsox flats, in green, on sale at Nordstrom. They're the perfect shoe to be stuffed into a purse in case of blister emergencies.
Posted by Rain at 9:10 PM No comments: 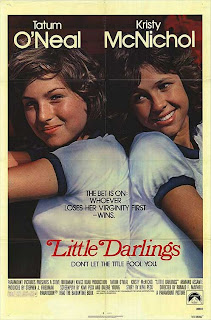 A week ago I was talking with a mom about Barbie dolls and whether she'd try to keep them away from her daughter once she got to the doll-playing age. Indeed there are issues with all things Barbie, especially surrounding body image, and it reminded me that as a kid I had what I thought was a Barbie-brand doll that had skin that would tan if you left her in the sun. Awesome! Teach girls that they should be impossibly skinny AND lay out in the sun for hours at a time!

But damn I loved that doll. I researched and found out it wasn't a Barbie, but some kind of knock off called the Tuesday Taylor doll. Here's an early commercial featuring her sister Dodi (!). Try repeating the last line the narrator says ten times fast...

I think there were far worse things than Barbie that screwed up my self-esteem as a youth, but I do think this Barbie commercial is, for some reason, incredibly creepy--even with the presence of Marcia Brady herself--and would most likely have given me nightmares if I ever watched it as a kid.

I was not the only person pissed by that Biggest Bad-Ass Award...

I wonder if the dozen or so follow requests I get on Twitter EVERY DAY (seriously, every single day) are just people thinking Korean Pop Sensation Rain has a Twitter feed that's pink and focuses on television. I wonder if he'd give me a million bucks for my account? (Call me, Rain. That's the starting price.) Then he can deal with all the @ messages telling us to fuck off (people complaining about the weather) or telling us they are partying inside us (people saying they are at the Rain nightclub in Vegas). It's tough being an icon.
Posted by Rain at 10:24 AM No comments:

You Might Want To Watch the MTV Movie Awards Sunday 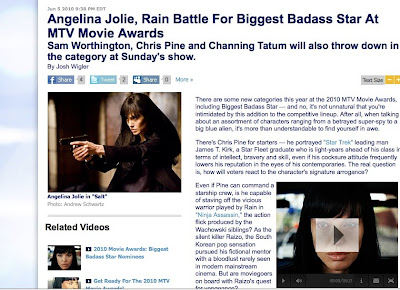