Are You Ready? You Better GET Ready!

Once again, for the entire month of October, I will be partaking in the great bloggy Countdown to Halloween. This will be the fifth year in a row I've participated, and that in itself is something to be celebrated, methinks!

So, starting tomorrow, be sure to check in here daily for a recommendation of something Halloweeny to watch on TV. Most of the time it will be some kind of movie, but sometimes it might be a Halloween special, or some other kind of spookiness. (And note, all air times will be PST, and sometimes local San Francisco channels might be listed.)

When Halloween stuff started showing up in stores at the beginning of September, I found that a little annoying. But I think the entire month of October is open season for all things Halloween, so from here on out, I say BRING IT. 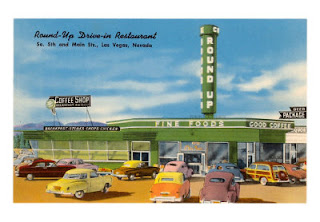 In August I took a brief trip to Las Vegas, which you can read about here. Being able to take off on a spur of the moment trip is totally awesome, let me tell you.

But there were other bits of entertainment to be had in August. So let's look back at those now, shall well?

Books Read: Six. I found "Full Dark, No Stars" by Stephen King, a collection of short stories (novellas?), a little hard to get into at first because the opening story was a slow start. But eventually it kicked in, and I got through the collection quickly, as tends to be the case with better King.

Another edition of "The Walking Dead" (Vol. 7) was followed by two memoirs about love addiction, "Love Junkie" by Rachel Resnick and "Desire" by Susan Cheever. I read an article on the subject that was kind of interesting, and then looked into some books about it, and those were at the library, so I checked 'em out, and read 'em...Unfortunately, neither were that compelling.

Finally, there was "Summer and the City" by Candace Bushnell, the second in her series about Carrie Bradshaw in her younger years. This one takes place in the early 80's, and I have to say, young Carrie Bradshaw is a lot more tolerable than later Carrie Bradshaw ended up being...

Fancy Dinners Out: Three. Two of those dinners were in Vegas, and the other was at the bar at the Big 4. (Chicken pot pie. Mmmmmmmm.)

Live Shows Seen: One! Adele at the Greek Theater. So much about this show was just pissing me off. First, it was supposed to be at the Warfield at the beginning of June, which was great. I can walk there, and I got first row balcony seats. But then her album was released, it was huge hit, and the show was moved to the Greek Theater in Berkeley. I hate the Greek Theater. It's hard to get to; it's uncomfortable; and it's too big. But fine. They were going to reserve a section for people who had reserved balcony seats, so that was good, even if it still meant we'd have to get there early and wait in line to guarantee a good spot.

Since the show was the first weekend of June, that meant my trip to New Orleans would have to end by a certain date, even though it would have been cool to be able to stay longer. So, of course when I got back to SF, the show was rescheduled because Adele got sick.

Luckily, it was rescheduled for a day I was actually in town, and in the end, we had good seats, and it was a fantastic show, but man. Such rigmarole!

Here's one of my favorite moments from the evening:

Shoes Bought: Two pairs. One are this pair of vintage brocade pumps, bought on Haight Street. The other are these fake TOMS called Bob's, in blue. Sketchers pretty much ripped off the TOMS concept and released their own version, but whatever. They were cute, comfortable, and cheap!
Posted by Rain at 7:25 PM No comments: