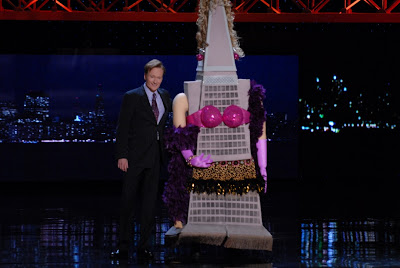 Thanks to NBC11, I was able to avoid the massive line that stretched from the Orpheum Theater to, apparently, the Ferry Building (or so it seemed) and instead just had to stand around in the "V.I.P" area of the theater for an hour. An area that had a bar that was, alas, closed, although it was fully stocked, and just sitting there, taunting us. The seats for this particular group of V.I.P.s were on the mezzanine level which, while not the floor, were still pretty good and allowed full view of the action.

It was a tight show, and it's always amusing to see what goes on when it's commercial time. The band plays, lots of people wander around the stage, and Conan just kind of mills about, at least when he didn't have Dana Carvey sitting next to him. They had some technical difficulties with the fake San Francisco backdrop (which was a video image of the skyline) so it will be interesting to see how they cover that, if at all, in tonight's broadcast. I won't give away too much about the show, but there's a pretty funny video bit taken around the City, as well as a little cameo as featured in the above picture. You can guess the joke...

Hopefully I'll be able to attend Friday's taping, which would be great--taking in both the opening and closing night shows, how very circular. I'll keep you posted. And if you want to freeze your TiVos and look for me in the crowd shots, like I said, I'm on the mezzanine level, in the middle, wearing a red sweatshirt. And a rainbow wig.

Email ThisBlogThis!Share to TwitterShare to FacebookShare to Pinterest
Labels: Me Me Me, San Francisco

Unless your my Dad, of course.

it might very well be a southern cal thing, i've not noticed but will henceforth attune. sometimes a southern u.s. speech thing is the dropping of the 'the' and the pluralizing/possessivizing of names, ex: 'the warfield' would be 'warfields', slims would become 'slimses', et cetera. ha!

That's another thing my Pa does, with the adding of the 's' to things. Then again, he did spend much of his youth in the South, so maybe that's it.

And I should really refrain from criticizing other people's language skills when I couldn't even get "you're" correct in my last comment.