It's BALL, Not Balls. That Would Just Be Gross. 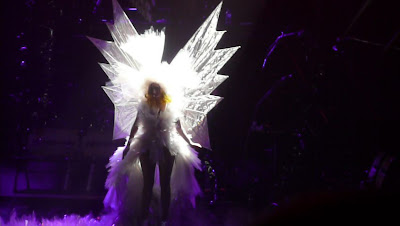 I went to the Lady Gaga show, AKA, the Monster Ball, on Monday, and wrote a review, which you can read over on the SF Appeal. Read it! DO IT!

A few things not mentioned in the review:

* I totally missed my exit once I got to San Jose, but was able to drive directly to the Pavilion, despite a total lack of signs leading the way, and despite the fact that I have only driven there once before. Do not doubt my sense of direction, yo!

* I took my 17-year-old cousin to the show, and she couldn't get over how many old people were in the audience. Aside from me.

* One of the most memorable aspects of the show, to me, was hearing Gaga's heavy breathing during rare moments of quiet in between songs. Hearing the amplified sound of someone catching their breathe in an arena filled with thousands was a new for me. You'll never hear Madonna trying to catch her breathe during her shows, (since she's superhuman), or Britney at hers (since she doesn't actually sing). It was oddly humanizing....

* I left the parking lot at the HP Pavilion in San Jose at 11:45pm and arrived in San Francisco at 12:20am. That's driving, son! (Also, it was a sad reminder of the horrors of rush hour traffic, as sometimes my shuttle ride home from Sunnyvale, which is not too far from San Jose, can take two hours.)
Posted by Rain at 1:19 PM