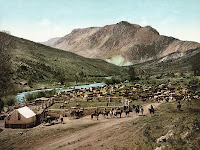 This Round-Up is a lie! A LIE!

Well, its date of publication is a lie. Coming back from vacation was a hard reality to face, and as such, I have fallen way behind on my bloggy duties. So, let's just pretend it's actually the end of July, and briefly look back at June, shall we?

Movies Seen: Twelve, with four in a theater. You can read my reviews of a two of those below:


Marilyn: Her Life In Her Own Words by Marilyn Monroe and George Barris

Would It Kill You To Stop Doing That by Henry Alford

No Cheating, No Dying by Elizabeth Weil

Fancy Dinners Out: I took advantage of Dine About Town and had dinner at Forbes Island, (my second time there, and it's definitely worth it...if you're eating at a discount!) and the Burritt Room, (I like their curtained booths; food was OK).

There was also a Father's Day brunch at Town Hall, in which they sold out of the fried chicken--which is what my dad wanted to order--right before we got there. Doh!

Live Shows Seen: One. A live taping of a Kristen Schaal stand-up special for Comedy Central. We were seated in the second row on the right side of the stage, so when it's on, look for me!

Shoes Bought: Two pairs, though only one pair was kind of bought. My mother got a pair of these Chelsea Crew t-strap heels in a light pink, but they didn't fit, so I bought them off of her. And Michele gave me a pair of vintage white, black and gold stilettos, just like these, that didn't fit her....
Posted by Rain at 12:35 PM

I’ve been reading your blogs and found you have some great content about the cinematic (and also a little bit of everything else). I thought you might be interested in contributing to HeyLets, an exciting new app that says “hey, let’s do something!”

HeyLets connects people, places and experiences to change the way you socialize. Write micro-reviews of your favorite hang-outs and activities and we’ll share them with the world. Create content that people love and you’ll become a ‘Taste Maker’ - an authority in your field. It's a fun new way to explore your environment, meet new people, and promote your personal brand!

Next time you’re doing something you’d like to recommend, just tweet it! Simply start your tweet with #HeyLets and we’ll start building your profile. Whether it's for your blog or you're just having a great experience, when we launch, you’ll be established as an opinion leader on the things you care about.

Here are some examples:

You stumble upon an unexpected nicety in an innocuous bar:
#HeyLets grab bloody marys this Sunday at Thieves Tavern. Rob whips ‘em up right with homemade pickles!

You’re out for a nice meal and try something you’ve never considered before:
#HeyLets go out to dine at Frances. No meal should be complete without bacon beignets. Period.

Or maybe you’re just having a good time at a classic San Francisco location:
#HeyLets blow our laundry money @ the Musee Mecanique–your arcade favorites & some from the 30's you've never heard of.

Want more info? Don’t hesitate to get in touch!