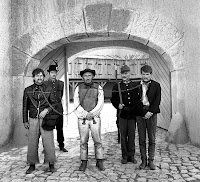 Halloween and October are coming to an end. So let's go back in time to September, before having to face the impending crush of the holidays was causing panic attacks.

Movies Seen: Twelve, with none in a theater. Most of them were pretty bad. ("The Book of Eli," "Repo Men," and "Clash of the Titans" being some of the worst.) The best was "Me and Orson Wells," a great little movie from director Richard Linklater. The performance by Christian McKay as Orson Welles is amazing, and Zac Efron is surprisingly good. See it!

Books Read: Three. "Imperial Bedrooms" by Bret Easton Ellis, which is a sequel to "Less Than Zero." It's about as bad as "Less Than Zero" was; maybe even a little worse. I guess I just don't go for nihilism and misogyny.

"The Passage" by Justin Cronin was a much better read, and despite its being an end-of-the-world book (well, post-apocalyptic) it was much less depressing than "Bedrooms." If you've got vampire fatigue, don't let the fact that this is about vampires turn you off of it. It's a gripping, epic read, and I can't wait until parts two and three.

Finally, the last book was "The Unnamed" by Joshua Ferris, the story of a guy with an unknown affliction that causes him to, at totally random moments, start to compulsively walk, for miles, and hours, until his body just gives out on him, and he passes out. This can prove very problematic during the winter, not to mention the issues of work and family. But despite the inventive and original plot, I was ultimately kind of bored by it, and kept wondering why the guy and his family didn't just move to a state with mild weather, so as to avoid the risk of frostbite and hypothermia....

Fancy Dinners Out: None!

Shoes Bought: Two pair, these bejeweled ballet flats, and these rubber wellies, both from Target.
Posted by Rain at 11:00 PM