San Francisco Is the Island of "Lost" 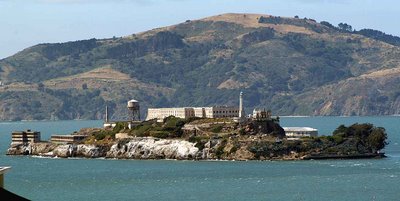 Don't read this if you haven't watched the latest episode of "Lost" yet.

So, let me see if I'm getting this. The Others have lived on this island for a long time, for reasons yet to be explained. For some reason, they are wary of strangers coming to their island, so they try to clandestinely learn about the survivors of the plane crash. And maybe kidnap all their children (although that might be the work of Other Others). Then they find out one of the survivors is a spinal surgeon, and since one of them has a nice fat tumor on his spine, he goes out to get himself captured and then try and lure the surgeon, or have him set-up for an abduction back to....a second island that none of the Losties has ever managed to notice. That's a little bigger than Alcatraz.

I have indicated that I have all kinds of patience when it comes to this show. I firmly believe it's not the destination with this one, but the journey, and the journey has been a hoot. But this Others stuff is really beginning to wear me down. We have no explanation for why they continue to play mind games with these survivors, and the more that goes on, the less an explanation will really matter. It's still not clear whether the Others ARE the Dharma initiative, just survivors of the Initiative, or something completely unrelated. Someone is still delivering supplies to the hatch, so someone thinks those experiments are still going on, right? And speaking of the hatch, could they tell us what the hell happened to it already? Did that sonic boom cause anything to happen besides causing the hatch door to land on the beach? Was the hatch bunker completely destroyed? And what's with the giant foot statue?

I think the show worked better when they kind of trickled the clues in a little at a time. But now that they've devoted full episodes to the mysterious undertakings of the Others, without providing any real answers, it's just become annoying. How can they show us so much and tell us so little? There better be some awesome reveals in the next two episodes, because I want to go back to longing for the show when it goes on its three month hiatus instead of welcoming a break from the bullshit.
Posted by Rain at 11:27 AM

Email ThisBlogThis!Share to TwitterShare to FacebookShare to Pinterest
Labels: Lost

As for what happened with the hatch: the episode with Locke & Charlie & the polar bear showed a big crater where the bunker used to be and the explanation that "it imploded." For the after-effects, I'm guessing that Desmond's precognition and whatever happens with Eko will be the fall-out from that.

Further evidence that we're on different wavelengths: I really liked the episode a lot, and thought it was finally showing signs that all the frustration could start to pay off.

Well, I still have faith in the show. I just think the Others' need to be all creepy and torturey is becoming less and less explainable.