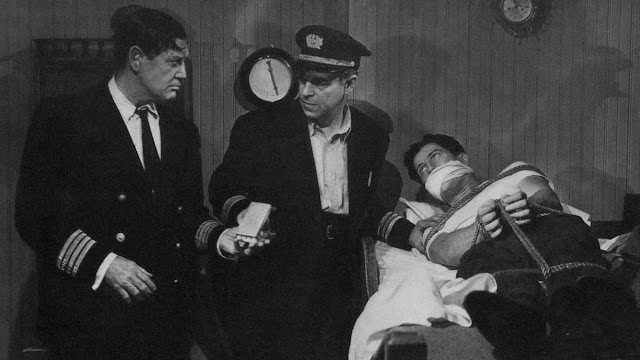 Made in the 1943, The Ghost Ship is a Val Lewton production, although it's considerably lesser known than the rest of his horror output (which of course includes Cat People and I Walked with a Zombie). I'd also say it's less of a "horror" movie than those others, and more of a straight up thriller, although it does include one memorable death scene (involving a young Lawrence Tierney).

That scene, combined with a a creepy performance from craggy faced actor Skelton Knaggs, whose character is both mute, and the film's narrator, and some calypso songs from Sir Lancelot, make it worth a watch, though I'd be sure to seek out the other films in Lewton's oeurve first.

And if you simply can't be bothered, at least watch that death scene!

The Ghost Ship is available to stream free on...Betamax TV?!

Love this film...it's known for it's sound design...I keep meaning to watch a second time to focus on this, but as always I get caught up in the story and forget.