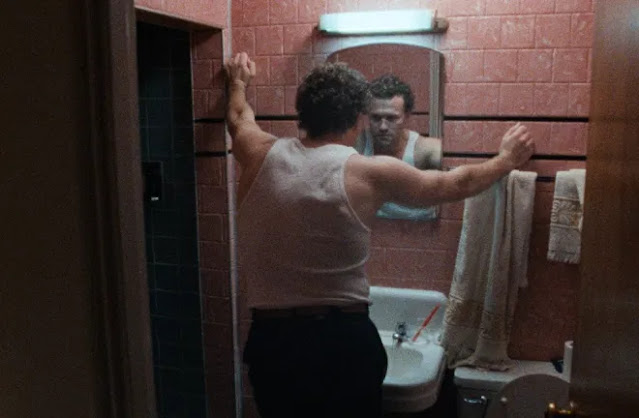 Henry Portrait of a Serial Killer is another disturbing movie I was sure I hadn't seen, but when I started watching it, began to question that assessment. Again, I wasn't sure if that's because I'd watched clips, and remembered those, or because I actually did see it, and blocked it out of my memory.

When I was 12, I started writing down and rating all the movies I watched in an old ledger. So I looked in that old ledger at all the films I'd seen between 1990 (the year it was released) and 1995 (the span of years when I would have been likely to rent it), and I didn't see it listed. So...I guess I really hadn't seen it?

And I kind of wish I still hadn't! Now, I can understand why it got some acclaim, especially compared to the usual slasher fare that permeated the 1980s. It takes its subject matter very seriously, and is unflinching in its depiction of violence, and Michael Rooker is very good in the lead role. In fact, it was another instance where Siskel and Ebert used it as the centerpiece on an episode of their show that was focused on films that were getting labeled with an X rating, before the creation of the NC-17 rating (which, history has proven, never really stuck).

But, like Last House on the Left, its low-budget adds a level of sleaze that makes its subject matter all the more unpalatable. And sure, maybe something like this shouldn't be palatable. Maybe it should be upsetting. That's fine. It's just not an experience I'd willingly seek out.

On an amusing related note: About ten years after the movie was released, I sat behind Michael Rooker at an outdoor theater in Disneyland, and I couldn't get over the fact that Henry the Serial Killer was sitting in front of me, nuzzling the top of his daughter's head.

Henry: Portrait of a Serial Killer is currently streaming on Shudder

This film gave me horrible nightmares. Give me fantastical monsters - vampires, ghosts, werewolves - any day over the terrifying reality of a living breathing psychopath.