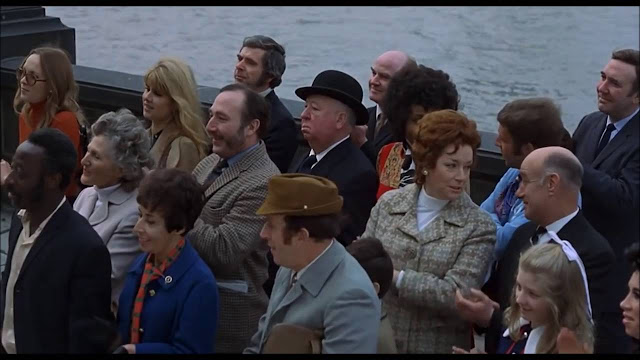 You'd think a horror fan like me would have seen all of Hitchcock's movies--twice!--but there are actually a few I never got around to, and Frenzy is one of them.

Released in 1972, Frenzy marked two milestones: It was filmed in England, which Hitch had not done since 1950's Stage Fright. And it was the first and only R-rated movie he ever made.

Which brings me back to the reason I had never gotten around to seeing it, because actually, it was less a "never getting around to" than a conscious avoidance. Centered on a London serial killer who likes to rape and then strangle his victims with a necktie, I had read multiple times that the rape scenes are very disturbing to watch. And they are. They really, really are. But it's not just because rape is disturbing. It's because while watching, you can feel Hitchcock's prurient gaze throughout. There's a lascivious feeling to the scenes, particularly the first rape and murder that happens on screen, like Hitchcock was pleased as punch that he could finally show a rape and nudity, after only being able to allude to it for decades.

Yep, Hitchcock finally gets to show naked women in a movie, and he shows them every chance he can get. No matter that the majority of those naked women are also corpses. That he's also treading a bit of water, thematically, with a central "wrong man" story, and a villain I think he hopes you to root for every now and then, ala Norman Bates, just adds to the disappointment that is his penultimate movie.

Hitchcock liked to appear in some of his trailers, including this one for Frenzy. Gotta say, it's more enjoyable than the actual film...

If you subscribe to Peacock, Frenzy and several other Universal Hitchcock movies are included in the subscription. I rented it from Amazon Prime.