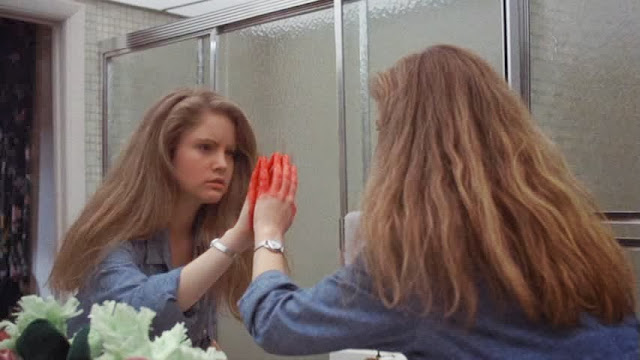 The only reason I decided to watch Eyes of a Stranger is because it was Jennifer Jason Leigh's motion picture debut, after she appeared in a number of TV shows and one TV movie. (That TV movie was The Best Little Girl in the World, a film about anorexia in which she dropped her weight to under 90 pounds, thus turning a story that was supposed to be about the dangers of anorexia into something girls with eating disorders would watch for inspiration. But that's a story for another post.)

Here she plays a deaf, blind, and mute teenager who lives with her newscaster sister, played by Your Cruise Director herself, Lauren Tewes. They are both surprisingly good in a movie that never rises past mediocre. It's a hodgepodge mix of slasher movie, rape revenge drama, and Rear Window ripoff, where there's no mystery as to who the killer is: it's the neighbor across the way who looks like Meatloaf in a business suit.

Tom Savini did the splatter effects, though most of them were cut out of the original release of the film. I believe they have since been added back and that cut is what was released by Shout Factory earlier this year on Blu-ray. (I watched a crappy version available to rent on Amazon Prime.)

I enjoyed this one, on your recommendation a year or two ago. Fun movie. Tewes is her cute, fun self.