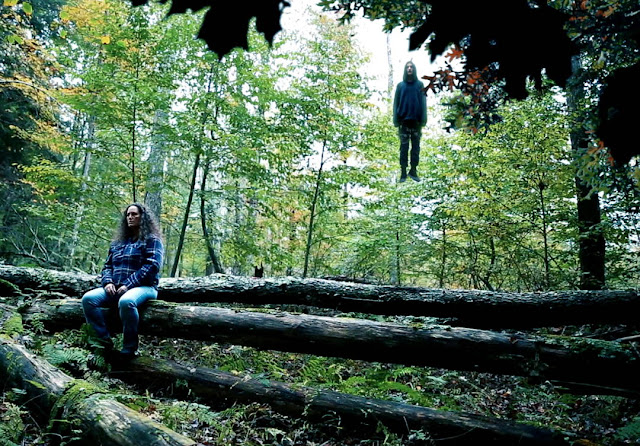 The Deeper You Dig is a memorable little indie horror film, written, directed, and starring the Adams family (yep, really). They're husband John Adams, who co-wrote, co-directs, and co-stars, wife Toby Poser, who also does all of the above, and daughter Zelda, who co-stars. (They also have another daughter, Lulu, who has appeared in previous films from their production company Wonder Wheel Productions but is not in this one.)

The story centers on mom Ivy (Toby Poser) who is a psychic who may or may not be completely fleecing her customers, her gothy teenager daughter, Echo (Zelda Poser), who goes missing after a night of sledding, and Kurt (John Adams), the neighbor up the road who definitely had something to do with it.

It's a slow burn of a movie. There's no real mystery as to what happened to Echo, both to the audience, and to her mother. Ivy's pretty sure Echo is dead, but she has a desperate need to find out just how it happened. Towards the end, there are some very surreal scenes that don't always hit the way I think they're intended to. It's like they're going for something Lynchian, but can't quite fully commit to the tone. But aside from that, it really lingered with me, and I will be seeking out the rest of this family's films. (Their latest, Hellbender, will stream on Shudder in 2022.)

The Deeper You Dig is currently streaming on several platforms, including Amazon Prime, Shudder, and Vudu.