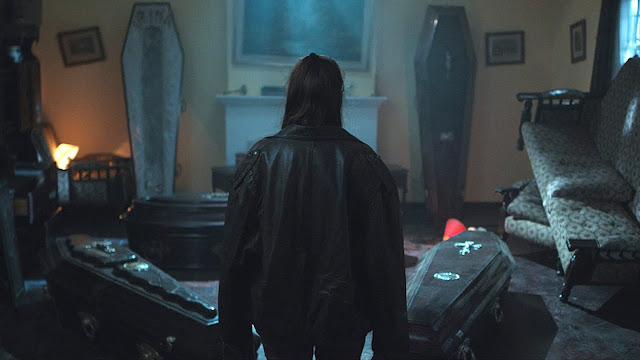 The Funeral Home is an interesting little horror film from Argentina, released online earlier this year.

A funeral home isn't actually the main setting of the film; it's the house behind the funeral home, where the owner lives with his wife, his stepdaughter, and a few ghosts. What makes the premise immediately interesting is how casually the family seems to take the presence of ghosts in their home, kind of how you'd take living with giant insects you can't kill. You hate them, you want to get the hell out of there if they won't, but until then, you deal with it as best you can.

I will admit it took me watching the ending twice to really understand what was happening, which was a bit of a bummer. And there is also one plot point so subtle that it is literally "blink and you'll miss it." (I know this to be true, because some reviews I've read did indeed completely miss it.) But, even if it was a bit confusing at times, it still managed to put me on edge with its consistently odd tone.

The Funeral Home (La Funeraria) is currently streaming on Amazon Prime and Shudder.