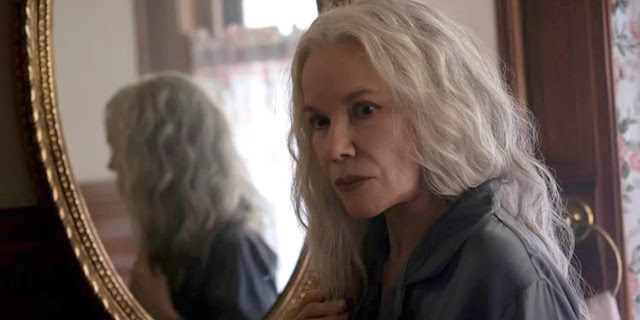 For the second year in a row, Amazon Prime has released a quartet of horror movies from Blumhouse productions in time for Halloween. Last year on this countdown, I featured two of them, Black Box and Evil Eye. This year, we have The Manor. (I also reviewed two others on my other site, Mulling Movies, if you'd like to learn about those!)

What a lot of these Amazon/Blumhouse productions feature are pretty standard horror stories, but starring nonstandard casts, which often helps the films rise above their somewhat mediocre material. The Manor is no different. There's nothing terribly surprising about its horrors, but at the center of the film is a really good performance from Barbara Hershey, playing Judith, a former dancer who is still a spry woman at 70, but who recognizes she may not be for long, so she voluntarily decides to start living in an old age home.

Of course spooky stuff starts happening, but because of her age and possible mental decline, no one believes her. And then her roommate dies....I won't say anymore, although like I said, there isn't really anything that surprising to anyone who has ever seen a horror movie, at least until the end. I appreciated which route they took with that.

The Manor is currently streaming on Amazon Prime.

Enjoyed it mostly for Hershey and her performance. And she is stunning, so that helps.