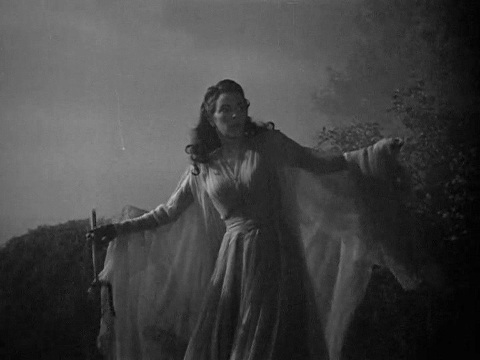 I've seen most of Val Lewton's RKO horror movies, but there are still a few holdouts, and Isle of the Dead was one of them. It was an interesting movie to be watching right now, as it's about a group of people who have to quarantine on a Greek island because of a breakout of septicemic plague. But aside from a general recommendation to "not gather in groups," they don't actually do much to prevent the spread. I kept thinking, "Put a mask on! Don't talk so close to each other! WHY ARE YOU TWO MAKING OUT?!"

There's a reason it's not as well known or loved as other Lewton films like Cat People and I Walked With a Zombie - it's pretty slow. But it does have Boris Karloff, and a final act that includes some really cool and creepy imagery. Turns out there's a lot you can do in a black and white movie with a spooky woman in a flowing white dress.

Isle of the Dead is available to rent on most streaming platforms.

Slow can be hard, unless you are in the right frame of mind. The woman in the flowy dress sounds evocative, though.