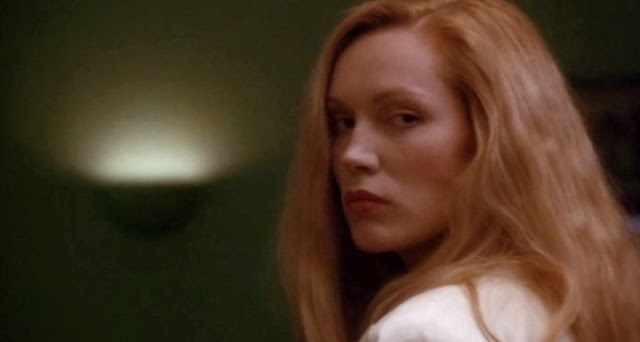 I don't think I had ever heard of White of the Eye until I saw it included in the Criterion Channel's lineup of 1980's horror movies. It was directed by Donald Cammell, a Scottish painter-turned director who only made a few films, most famously Performance (which he co-directed with Nicholas Roeg), and Demon Seed, the horror movie where Julie Christie gets raped by a computer (!). His personal life was almost as weird as one of his movies: He married his second wife, China Kong, when she was 18 and he was 44, but they started their relationship when she was only fourteen, (yikes!) and he died by suicide in 1996.

The screenplay for White of the Eye was actually co-written by Cammell and Kong, and she also has a tiny part in the movie. The main stars are David Keith (of An Officer and a Gentlemen and Firestarter) and Cathy Moriarty (Raging Bull) as Paul and Joan, a married couple in Arizona. He installs expensive stereo systems in wealthy homes while she raises their mullet-haired daughter. When a serial killer begins to murder rich women in their homes, Paul is the primary suspect.

There's a lot of cross-cutting between the past and the present in the film, which is definitely Cammell's style, but it doesn't completely work, and is sometimes a tad confusing. I'm not sure the movie really brings much that's new to the serial killer genre, but it's definitely got style, a great soundtrack, and an ending that's kind of nuts.

I watched White of the Eye on the Criterion Channel.