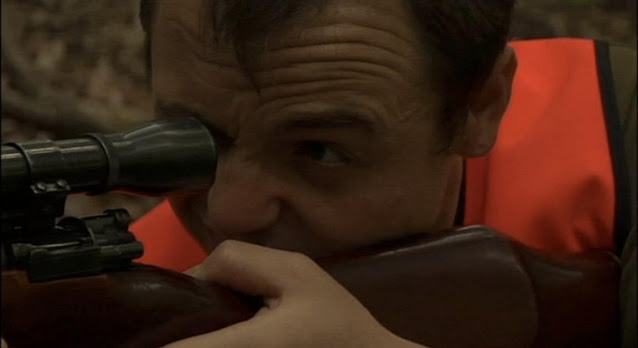 Ti West has directed some of my favorite horror movies of this 21st century, but I realized I had never seen his second film, the very low budget, shot on video 2007 thriller Trigger Man, or, if I HAD seen it, I have no memory of it.

Turns out, I wasn't missing much. Which isn't to say it's a complete waste of time, especially if you love to watch shaky cam footage of men in orange vests wandering around the woods. A lot. And when I say shaky cam, I mean reallllly shaky. It was a movie I didn't feel bad looking at my phone through much of because if I didn't, I'd probably have ended up puking from motion sickness. That said, within the simple story of some hunters becoming the hunted, West does craft some effective moments of suspense and surprise, techniques he was able to perfect once he had bigger budgets and larger stories to tell.

I couldn't find it streaming free, so watched it via DVD from Netflix.