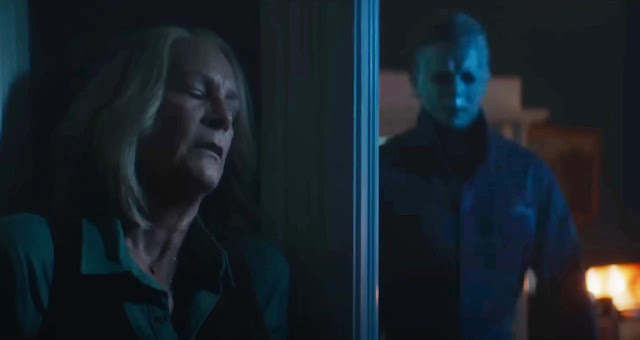 Last year, I ended the countdown with Halloween Kills so I figured it would be appropriate to end this year's countdown with its sequel, Halloween Ends, which Jamie Lee Curtis (and director David Gordon Green) insist will be their final forays into the franchise.

I enjoyed the first of these three sequels, but the second one was too focused on a body count, and not enough on Laurie Strode. I openly hoped the third one would once again chuck the whole Michael Meyers thing and go for something as silly as Halloween III: Season of the Witch. Green doesn't go that route, but he does try to take the franchise in a slightly different direction, focusing on some new characters, and the idea that evil can spread from person to person like a virus, especially to those with weakened moral centers. Which, granted, is an interesting idea, certainly influenced by these pandemic times.

But as a whole, I don't think Halloween Kills really works. For one thing, why does half the cast sound like they're from New York when this is set in Illinois? For another, it is always annoying to see a female character fall for a guy who is obviously troubled, thinking she's going to be the one to save him. That the female character in question this time is Laurie's granddaughter Allyson just makes it doubly annoying because we know she's a smarter woman than that. Honey, slashers gonna slash!

As a whole, this trilogy of sequels/reboots weren't as terrible as they could have been, owing mostly to the presence of Jamie Lee Curtis in all three. But if she's stepping away, then there is really no need to continue this franchise, and I hope that, for once, finally, Michael Meyers does not get back up.

I watched Halloween Kills on Peacock, but it is also still playing in theaters.

I enjoyed this one way more than KILLS. It tried something new and I was there for it. Happy Halloween!

Thanks for your visits and comments, and Happy Halloween!